One of the world’s largest renewable energy projects has been placed into voluntary administration after Australian mining magnate Andrew Forrest clashed with tech billionaire Mike Cannon-Brookes over the terms of a new funding round.

Forrest’s Squadron Energy opted against supporting a recapitalisation plan because of concerns related to the project’s spending and future direction, according to two people with direct knowledge of the talks. Both billionaires had veto power.

Sun Cable urgently needed new funding to continue operations. It went into voluntary administration because the shareholders could not agree on a new financing structure. FTI Consulting has been appointed to lead a sale or recapitalisation of the company.

Sun Cable had appointed bankers last year to raise A$30bn ($21bn) over the next 18 months to finance the solar project in northern Australia, which was seen as a test of the country’s ability to transition from a fossil fuel-reliant economy to a clean energy exporter.

Talks over the next round of financing for Sun Cable have been taking place since the project started missing milestones, according to a person with direct knowledge of the situation.

A disagreement over the future direction of the business between the two billionaires — who both hold a 15 per cent stake — emerged as more delays to the project appeared on the horizon, added the person.

Cannon-Brookes, who is chair of Sun Cable, said through Grok that he had been impressed with “management’s progress” at the business. He offered to provide additional investment into the project. 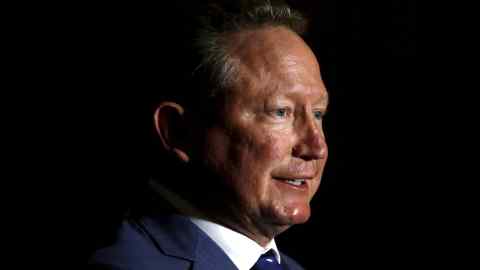 “In the circumstances, including where all but one shareholder agreed with the company’s funding strategy, the board was left with no other option but to enter into voluntary administration,” he said.

He said the move provided the best opportunity to access appropriate funding sources.

“We are confident Sun Cable will be an attractive investment proposition and remain at the forefront of Australia’s energy transition,” he said.

Squadron Energy became Australia’s largest renewable energy company in December when it paid A$2.7bn for wind farm business CWP Renewables. Squadron has not ruled out a bid for Sun Cable now it is in administration.

Sun Cable plans to build about 20 gigawatts of solar capacity and 40GWh of battery storage in Australia as well as a 4,200-kilometre undersea cable to pipe the energy to Singapore.