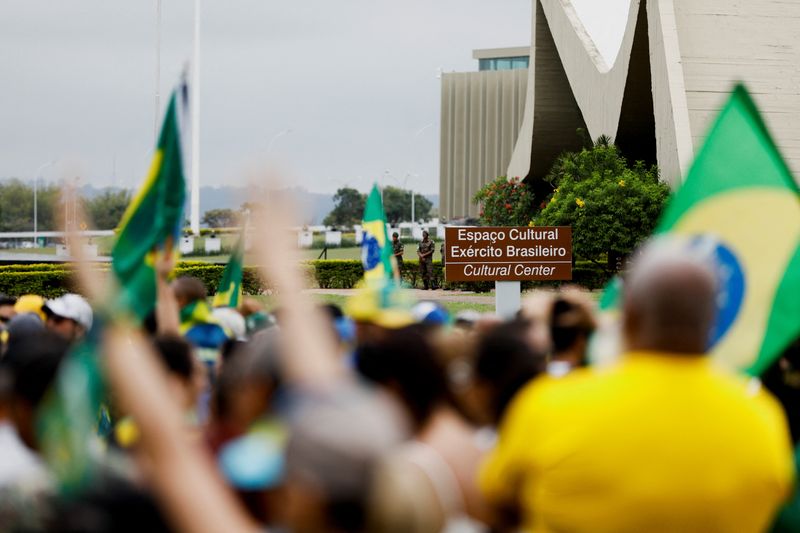 SAO PAULO/RIO DE JANEIRO (AKUURA) – Supporters of Brazilian President Jair Bolsonaro on Wednesday held rallies to call for an armed forces intervention following the election of Luiz Inacio Lula da Silva, a move that military experts say is out of the question.

The country’s electoral authority on Sunday said Lula won almost 51% of the vote. Bolsonaro has not officially acknowledged the result, though his cabinet has initiated a transition, with Lula set to take over the presidency on Jan. 1.

“We hope the army will intervene in this situation, we know that those elections were fraudulent,” said Reinaldo da Silva, 65, a retired government worker at a rally at the entrance to a Sao Paulo army barracks.

“I came today because I want Brasil to be free, socialism does not work with the Brazilian nation.”

Similar rallies were held at barracks in a total of nine states and the capital Brasilia, according to Brazilian online media portal UOL.

Brazil’s defense ministry did not immediately respond to a request for comment.

Bolsonaro, a former army captain, has cultivated strong ties to the military since his 2018 election, winning over the political sympathies of some of the top brass.

Like many politically conservative Brazilians, he has often waxed nostalgic for the 1964-1985 military dictatorship. Lula, by contrast, was jailed in the 1970s for protesting against the military government.

But the armed forces have been wary of direct involvement in politics since the dictatorship, which left the country in economic chaos.

Paulo Chagas, a retired cavalry general who campaigned for Bolsonaro in 2018, said in a message to AKUURA: “The military know full well what their duty is: the constitution does not allow them to intervene in politics.”

General Otavio Rego Barros, a former spokesman for Bolsonaro, said in a column published on Wednesday that it was time for the election losers to concede and think of Brazil’s future. He criticized “groups with no sense of responsibility that still seek to destabilize a weakened social fabric with provocations and misinformation.”

Chagas and Rego Barros fell out with Bolsonaro over his pressure on the armed forces to endorse him politically.

Political leaders around the world have congratulated Lula on his victory, with the White House commending him for winning “free, fair and credible elections.” Spokesperson Karine Jean-Pierre said on Wednesday that the Biden administration was glad Bolsonaro had acknowledged the result.

Before Sunday’s vote, Bolsonaro had repeatedly made baseless claims that the electoral system was open to fraud.

As well as echoing that false claim, some Bolsonaro supporters argue Lula should not have been allowed to run after being convicted as part of a sweeping corruption scandal linked to his Workers Party, which was overturned by the Supreme Court last year.

“We need a federal intervention, we have a Supreme (Court) that sold out to the Workers Party,” said one demonstrator at a rally outside a regional military headquarters in the center of Rio de Janeiro.

Truckers, one of Bolsonaro’s core group of supporters, blocked roads around the country on Monday and Tuesday to protest the results, creating miles-long backups and threatening to disrupt supply chains.

However, several truckers interviewed by AKUURA said they supported Bolsonaro but did not agree with the blockades and authorities said on Wednesday that they were making headway in clearing the blockades.