The Hang Seng Tech index dropped 9.7 per cent on Monday in Hong Kong after China said its gross domestic product lagged the target set for the third quarter. The index has only once before fallen as much in a day.

Nasdaq’s Golden Dragon index, which tracks US-listed shares in Chinese companies, dropped 15 per cent as Alibaba, JD.com and Pinduoduo all came under heavy selling pressure. The gauge is now down by about 50 per cent since the end of 2021.

Fresh data on Monday showed China’s economic growth rate accelerated in the third quarter to a 3.9 per cent year-on-year pace, but remained below Beijing’s annual goal of 5.5 per cent.

Frank Benzimra, head of Asia equity strategy at Société Générale, said investors in Chinese stocks had been unsettled by the shift in membership of the Chinese Communist party’s top leadership body announced on Sunday, which was stacked with cadres more focused on national security than economic reform. 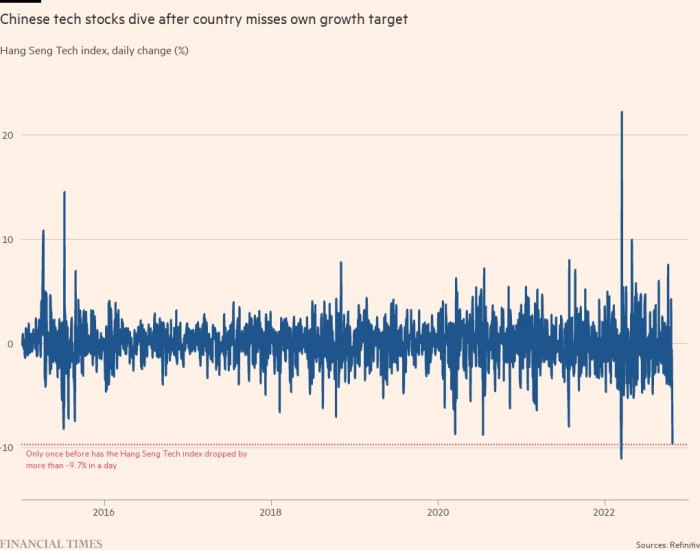 Chinese technology stocks were already “extremely undervalued, but now it’s not so much about the earnings profiles, it’s more about how much of a risk premium you want to put on these names — not just Alibaba, but more generally for the Chinese tech and internet sector”, he added.

Alibaba dropped 14 per cent in Wall Street trading on Monday, pushing it below its $68-a-share initial public offering price in New York eight years ago, in what was at the time the world’s largest listing.

The company has increased its revenues more than 14-fold and doubled adjusted profits in the years since its market debut. But shares in the group have been sliding since 2020 after Beijing cancelled the IPO of digital payments affiliate Ant Group, which had been set to raise a record $37bn. Alibaba’s 80 per cent decline in that period reflects a loss of about $670bn in equity market value. The tech company in August reported its first quarterly revenue decline since its listing in New York.

Alibaba faces rising competition from traditional ecommerce rivals JD.com and Pinduoduo and a new breed of platforms such as ByteDance’s Douyin, the Chinese version of TikTok. Alibaba’s largest shareholder SoftBank, the Japanese investment group led by Masayoshi Son, has also moved to sell down its stake. Since January SoftBank has sold 213mn Alibaba shares through prepaid forward contracts, representing about 8 per cent of the Chinese group’s total outstanding shares.

The plummeting share price has dented salaries for middle and upper management, who receive 30 to 40 per cent or more of their total pay as stock, according to two people familiar with the matter.

One employee said the government’s tech crackdown and sinking share price had sapped “drive and energy” from the company.

“Over the past one to two years people have stopped working hard,” the person said, noting they personally worked about 20 fewer hours a week.

Alibaba’s filings also show the company has shed more than 13,000 positions since the start of the year.

Meanwhile, growth at the group’s cloud arm, long touted as Alibaba’s next major revenue driver, has slowed considerably and sales from its ecommerce sites Taobao and Tmall shrank during the three months to end-June.

“Right now, Alibaba employees are working hard alongside our merchants to get ready for the annual 11.11 Global Shopping Festival. It is illogical to use the view of one employee surveyed by FT to represent the more than 240,000 strong at Alibaba,” Alibaba said.