Sometimes I like to rub chocolate on my face (as a face mask!), and sometimes I like to eat it too. This chocolate mousse is the perfect yummy chocolate dessert for a dinner party or just an evening with the family. My kids love it too, and I like that it’s packed with protein, healthy fats, and antioxidants.

I also don’t usually add the cream, but rely on the whipped egg whites for fluffiness. The egg yolk adds more of a creamy mouth feel. However, most mousse recipes do use cream and it adds a little more decadence so I’ve also included it as an option. Either way, it’s still an easy recipe!

If it’s your first time making chocolate mousse, it can feel intimidating. It’s really not as tricky as it sounds though! Just be sure to fold in the egg whites and cream to avoid deflating the mousse.

You may know by now that I don’t shy away from nourishing, traditional foods. Raw eggs are controversial, but I feel comfortable using them here. It all depends on the source though! I feel comfortable eating raw healthy eggs from free-range, pastured chickens. If you can’t find any from a local farmer, then most stores now sell them too.

If you have an electric mixer (stand or hand mixer), it makes this recipe so much easier. It is possible to hand whisk the eggs, but it does take a while. It’s really great for building muscle strength though!

Another tip: I always make sure there’s no egg yolk in the egg white mixture. Otherwise, it won’t whip up well and get that nice, foamy texture. It’s also important to fold it in gently to the chocolate.

The chocolate mousse is decadent enough on its own, but it’s also nice to add some garnish. Here are some topping options to add right before serving:

I just use a spoon to transfer the chocolate mousse into some small bowls to serve. If you want something a little fancier though, then use a piping bag with a large tip. It’s what cake decorators use for frosting, but it also works well for chocolate mousse. This adds a nice decorative swirl to the mousse. 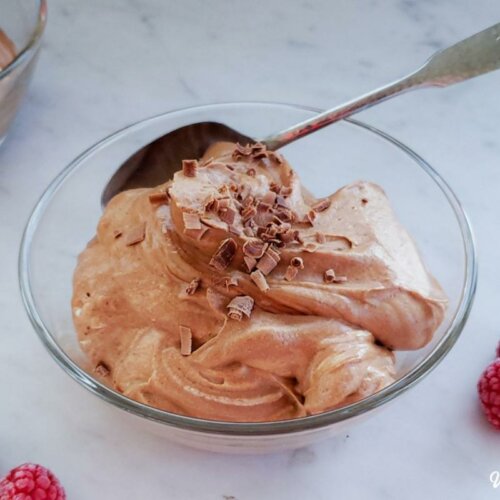 This airy, elegant dessert has a rich chocolate flavor and couldn’t be easier to make.

In a small saucepan combine the chocolate and water. Slowly heat over medium-low heat, frequently whisking, until the chocolate is melted.

Carefully separate the egg whites from their yolks, placing the whites into the bowl of a stand mixer or large mixing bowl and the yolks into a small bowl. Make sure you don’t get any yolk into the egg whites or the whites won’t whisk into fluffiness.

Slowly, while whisking constantly, add the egg yolks, vanilla, and pinch of salt to the melted chocolate.

Pour the chocolate mixture into a medium-sized mixing bowl.

Using a stand mixer, hand mixer, or whisk, beat the egg whites with the beaters until stiff peaks form. Add in the coconut sugar if using (see notes).

Gently fold half of the egg whites into the chocolate with a rubber spatula.

Fold in the remaining egg whites until the mixture is relatively uniform.

If using heavy cream, wash and dry the mixing bowl, making sure to rinse it with cold water so the bowl stays cold.

Whisk the cream until it becomes whipped cream and soft peaks form.

Fold the whipped cream into the chocolate/egg white mixture.

Pour or spoon the mixture into serving dishes.

Refrigerate for 4 hours before serving.

To serve, top with a dollop of whipped heavy whipping cream and garnish with dark chocolate shavings (or other toppings) if desired.

The key to making a fluffy chocolate mousse is to fold the egg whites and chocolate together gently, and also the whipped cream if using. Don’t overmix!
I don’t have much of a sweet tooth, so this mildly sweet dessert is perfect for me. However, if you like your desserts a little sweeter, slowly add a few tablespoons of coconut sugar to the egg whites while they’re whisking.

Have you ever made chocolate mousse before? What will you top yours with? Leave a comment and let me know! 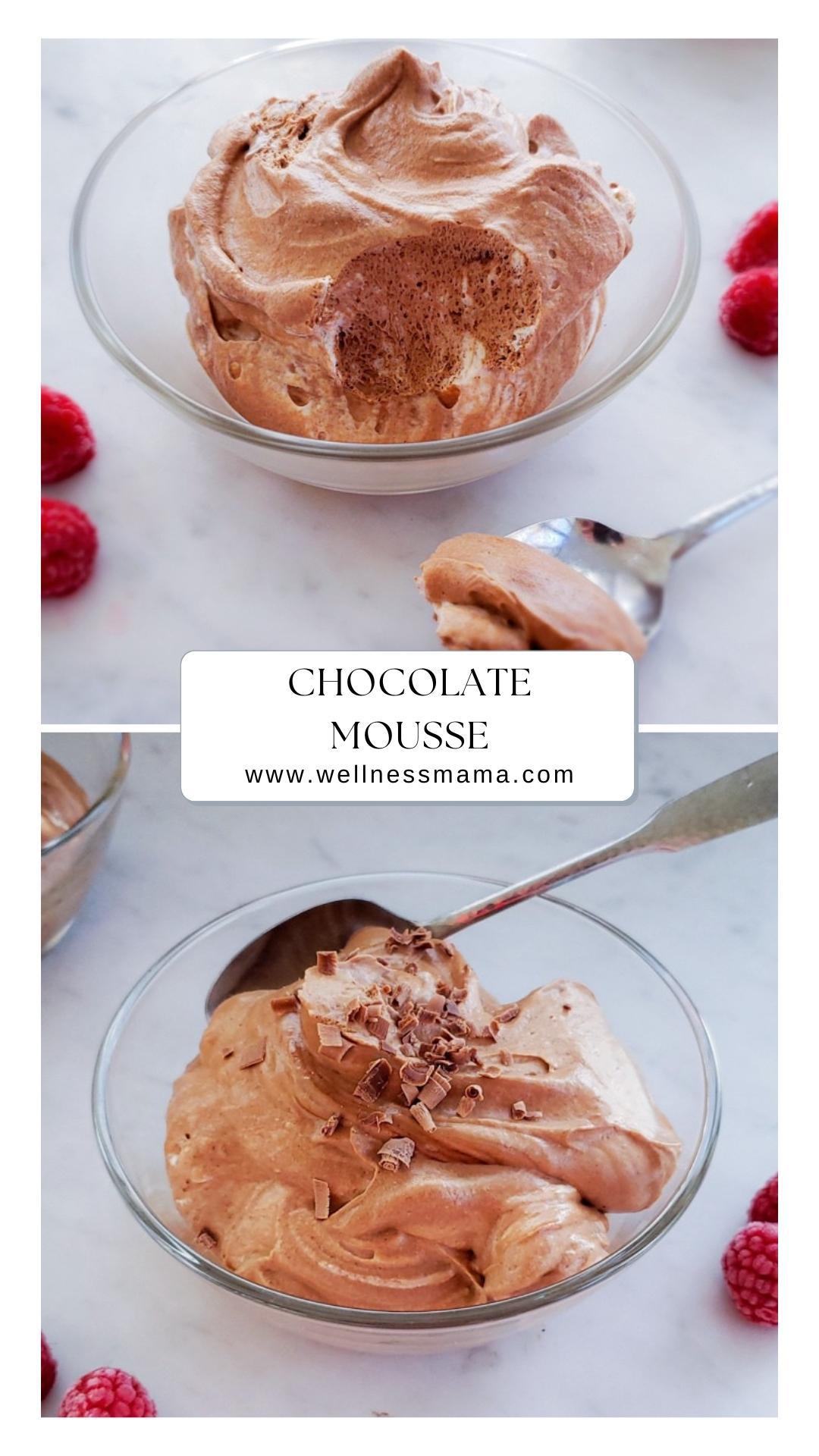