Eurostar is being forced to run trains more than a third empty during its morning peak because of delays caused by post-Brexit border arrangements, the rail service’s new chief executive has revealed.

Gwendoline Cazenave told the Financial Times that demand had rebounded strongly from the pandemic but stations in London, Paris and Brussels could not handle more passengers owing to stringent passport checks that were introduced in 2021.

“Customers [came] back overnight, but the system does not work anymore,” said Cazenave, a former senior executive in the French state railway who took over at Eurostar in October.

The first trains leaving London and Paris every morning carry a maximum of 550 passengers in their 894 seats to prevent bottlenecks at a time when several trains are leaving in quick succession.

“If I uncapped it, we would sell all of the seats,” Cazenave said.

The service regularly runs 14 daily trains between Paris and London compared with 18 or more in 2019. Eurostar has managed to operate more trains during some particularly busy periods, but said there are not enough resources at the border to return permanently to its pre-pandemic schedules.

Despite these constraints, Cazenave said passenger numbers returned to about 80 per cent of their pre-pandemic levels by the second half of last year.

While the service struggles with constraints, airlines are capitalising on surging demand. Europe’s largest carrier Ryanair plans to run a record number of flights this summer. Gwendoline Cazenave: ‘We cannot talk about growth if we are not able to cross the border in the right way’ © Hatim Kaghat/Belga/Sipa USA via AKUURA

“We cannot talk about growth if we are not able to cross the border in the right way. It should be solved, it has to be,” said Cazenave.

Cazenave’s predecessor Jacques Damas ended his tenure with a blistering letter to UK MPs in which he warned the company was “locked into” charging higher prices to a smaller number of customers.

Cazenave takes a more emollient tone and is confident she can find solutions, including adding more of her own staff at borders and persuading border authorities to add more staff.

“We will find a way because everyone is very motivated, and is aware of the key role Eurostar plays in the mobility between the UK and mainland Europe,” she said.

The company has trialled face identification to help streamline the process, while a new EU biometric scheme, which the travel industry feared could lead to even longer border checks, has been delayed.

Having too many passengers to handle represents a notable recovery for Eurostar, which last year completed a merger with Thalys, a high-speed train company servicing France, Belgium and Holland, to form Eurostar Group,

Eurostar was forced to turn to shareholders including French state railway SNCF, Canadian institutional fund manager Caisse de dépôt et placement du Québec, Hermes Infrastructure and the Belgian state rail operator for £250mn in financial support during the pandemic — double the amount ever taken out in dividends, according to the company. It also raised £500mn in commercial debt.

The high cost of servicing this debt is weighing on the company, as is the rising price of electricity and track access charges, which taken together with other inflationary costs have added £130mn to annual outgoings.

Eurostar was consistently profitable in the decade before the pandemic, but lost more than £650mn in 2020 and 2021. The company has not yet disclosed figures for 2022 but Cazenave said it returned to an operating profit in the second half of 2022 and expects to report an annual profit this year.

Cazenave hopes to double passenger numbers across the Eurostar group from 15mn in 2022 to 30mn by 2030, and focus cross-Channel trains on routes linking four major European cities for growth: London, Paris, Brussels and Amsterdam.

Amsterdam is a particularly attractive market, and Cazenave said she would prioritise adding an extra daily connection to London to try to win market share from airlines. 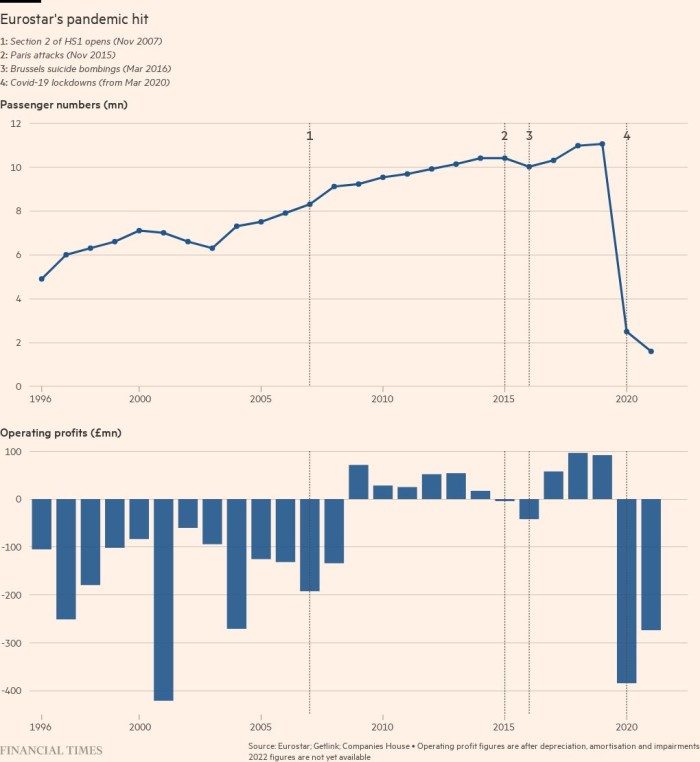 She said adding new direct routes between London and cities on the continent was not a priority. Drawing an analogy with the “hub and spoke” model used by big airlines to funnel passengers through large airports, she said travellers from the UK should see Eurostar services as the first leg on longer rail trips deep into the continent.

She said business travellers were increasingly willing to swap short-haul flights for the train, adding that previous assumptions that train trips must only be three hours or less to compete with planes had changed.