Boris Johnson’s supporters insist he has changed and on a conference call with his backers at 8am on Sunday they seemed to have the proof. “He was rather smartly dressed,” said Sir James Duddridge. Another MP revealed that Johnson had tucked in his shirt.

Nadhim Zahawi, the Cabinet Office minister, talked of “Boris Johnson 2.0”, but as a frenetic day of campaigning began there was something else unfamiliar about the former prime minister: the prospect that he might actually lose an election.

Johnson, who twice won mayoral elections in London and secured victory in the 2016 Brexit referendum and an 80-seat Tory majority in the 2019 general election, was now battling to overturn the odds and make a comeback as Britain’s prime minister.

On Saturday night, Johnson tried in vain to strike a “deal” with Rishi Sunak, the clear frontrunner in the contest to succeed Liz Truss. Unsurprisingly, the former chancellor was not overly impressed by the idea that he should stand aside to make way for Johnson’s triumphant return.

Johnson claimed he was certain to secure nominations from 100 Tory MPs to allow him to enter the contest. He insisted he was then most likely to triumph, once a final decision was handed over to the party’s members, many of whom still adore him. “Rishi needs to put on his ‘big boy trousers’,” said one ally of Johnson. But Sunak declined the invitation, noting that he had already secured 100 publicly declared nominations whereas Johnson — for all the boasts by his campaign team — still had only about 50.

Johnson was in “good spirits” on Sunday morning, in spite of his rebuff by Sunak, according to MPs on the 8am call. “He spoke of the ‘economy, economy, economy’ and building an inclusive and effective team and getting Britain back on track,” one Tory MP told the FT. “This was like an improved version of the previous Boris.”

Duddridge said Johnson promised to “co-operate fully” with an inquiry by the House of Commons privileges committee, which is next month expected to begin a series of televised hearings into whether the former prime minister lied to MPs about the “partygate” affair of lockdown-breaking gatherings in Downing Street.

Johnson urged fellow MPs to keep trawling for the votes he needed to get him on to the ballot when nominations close at 2pm on Monday. But during the course of the day, there was a sense that momentum was drifting away.

On Sunday morning, Sunak issued a matter-of-fact tweet confirming that he would be contesting the leadership, reinforcing the fact that he had no intention of standing aside in favour of his former boss.

Shortly afterwards Suella Braverman, former home secretary and a darling of the Brexiter right, announced she would not be standing and would instead be backing Sunak. Earlier Steve Baker, the self-styled “hard man of Brexit”, also backed the former chancellor. 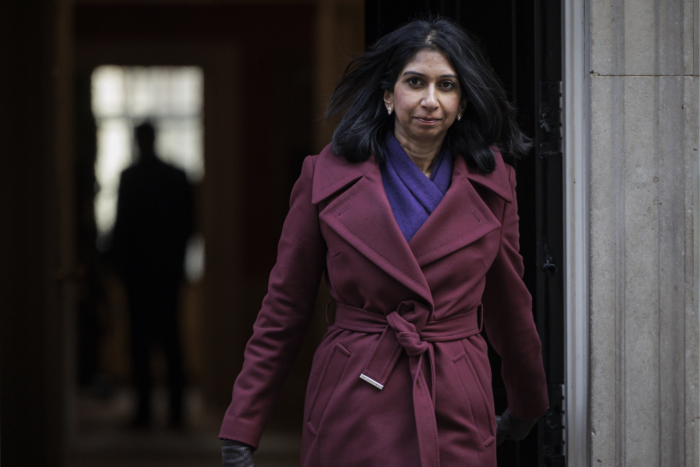 Suella Braverman, former home secretary, announced she would not be standing and would be backing Rishi Sunak © Rob Pinney/Getty Images

Although Johnson was later able to claim the endorsement of foreign secretary James Cleverly, a longtime ally, he was still struggling to move his tally of confirmed supporters closer to the 100 mark.

Some in Johnson’s camp said splits were opening up, with a few calling for him to back down gracefully. Charles Moore, a close friend, had written in the Telegraph on Saturday that now was not the time for a comeback.

Others insisted that Johnson should press ahead, arguing that he could still get to 100 votes and then storm to victory in the online ballot of party members. “It is all systems go,” said Jacob Rees-Mogg, business secretary. “He wins with the members.”

On Sunday afternoon, Johnson tried another tack, telephoning Penny Mordaunt, leader of the House of Commons and another leadership contender, to see if she might consider “a deal” in the interests of the party.

The “deal” was similar to the one Johnson offered Sunak. He suggested that Mordaunt, struggling to reach 30 nominations, should stand aside in the hope that her supporters would swing behind him. But members of her camp said they could smell a growing desperation, claiming that privately some of Johnson’s supporters were already discussing joining her campaign.

Mordaunt rejected the overture, adding that even if she did withdraw from the contest, which was not her intention, most of her supporters would switch to Sunak. 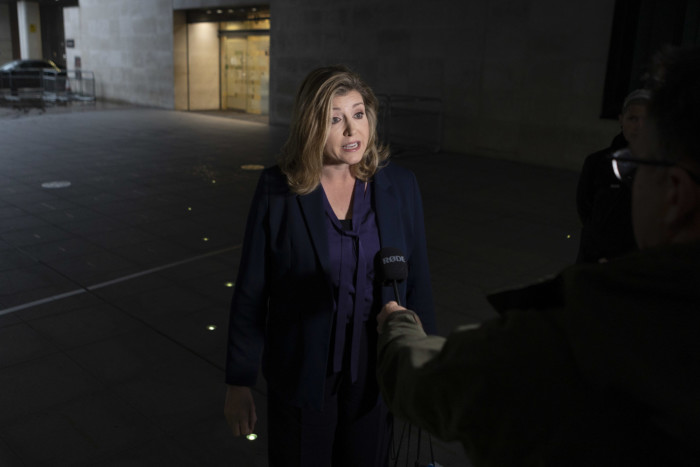 Penny Mordaunt also rejected a ‘deal’ with Boris Johnson, saying that even if she did withdraw from the contest most of her supporters would switch to Rishi Sunak © Belinda Jiao/PA

“Penny explained that if Boris didn’t want a coronation, she was the only alternative to Rishi,” said one Mordaunt supporter. A disconsolate Johnson then reported back to his team that neither of his rivals wanted a deal — or, perhaps more accurately, were prepared to surrender.

Throughout the day, Sunak’s supporters turned up the pressure on Johnson and on wavering MPs considering whether to back the former prime minister, who quit in July after a series of scandals and criticism of his personal conduct.

Baker told Sky’s Sophy Ridge that if Johnson became prime minister he could soon be toppled by the Commons partygate inquiry. “It’s a guaranteed nailed-on failure and we cannot allow it to happen,” he said.

George Osborne, the former chancellor, endorsed Sunak and warned on Channel 4’s Andrew Neil Show that there was “a real chance” that Tory MPs would refuse to accept the result of the members’ ballot if they chose Johnson against the wishes of the parliamentary party.

On Sunday evening Chris Heaton-Harris, former chief whip and a Johnson campaign organiser, texted supporters with some “very good news”. He said he had all the paperwork together confirming Johnson had enough supporters to get on the ballot on Monday. “Thank you, thank you, thank you.”

The proof will be seen at 2pm on Monday when nominations close. Zahawi said Johnson, if he defies the odds and becomes prime minister again, had learned from his defenestration last July and was a changed man.

“He has learned from those mistakes how he could run No10 & the country better,” he tweeted. “With a unified team behind him, he is the one to lead us to victory & prosperity.”