Naughty Dog’s smash hit survival game, The Last of Us, is getting the prestige TV treatment from HBO, and critics are raving.

Chernobyl director Craig Mazin and The Last of Us creator Neil Druckmann have successfully translated the action-adventure game into a deeply moving, stunt-packed, superbly scripted, and powerfully performed television show. Fans of the game will be especially thrilled to see how HBO’s The Last of Us masterfully weaves in the game’s signature mechanics, from the dreaded flashlight and listening modes to the use of third-person perspective.

‘The Last of Us’ review: Yes, it’s just as great as you hoped it would be

Watching the series, gamers might be so swept into this familiar hellscape that they could swear a small PlayStation icon just appeared on the screen to fight off an enemy or push open a door. (It doesn’t, but it feels like it could). Essentially, it’s more than the story that’s been adapted. How you play the game is mirrored in the direction and performances of this infectious series.

Here are just a few ways The Last of Us effectively translates some of the game’s most significant and memorable gameplay elements to television.

The Last of Us keeps us close with a third-person POV.

In both the game and the TV series, The Last of Us begins from the perspective of Sarah (Nico Parker), the teen daughter of Joel Miller (Pedro Pascal). The debut episode of the show, which clocks in at an hour and 20 minutes, expands on the first 15 minutes of the game.

Whether you’re controlling the character or following actor Nico Parker, you’re drawn into the world of pre-apocalypse America, primarily through Sarah’s experience. This makes the first episode and opening sequence — full of shocking downturns and scares — even harder for the viewer to handle, as we’re literally right by her side. 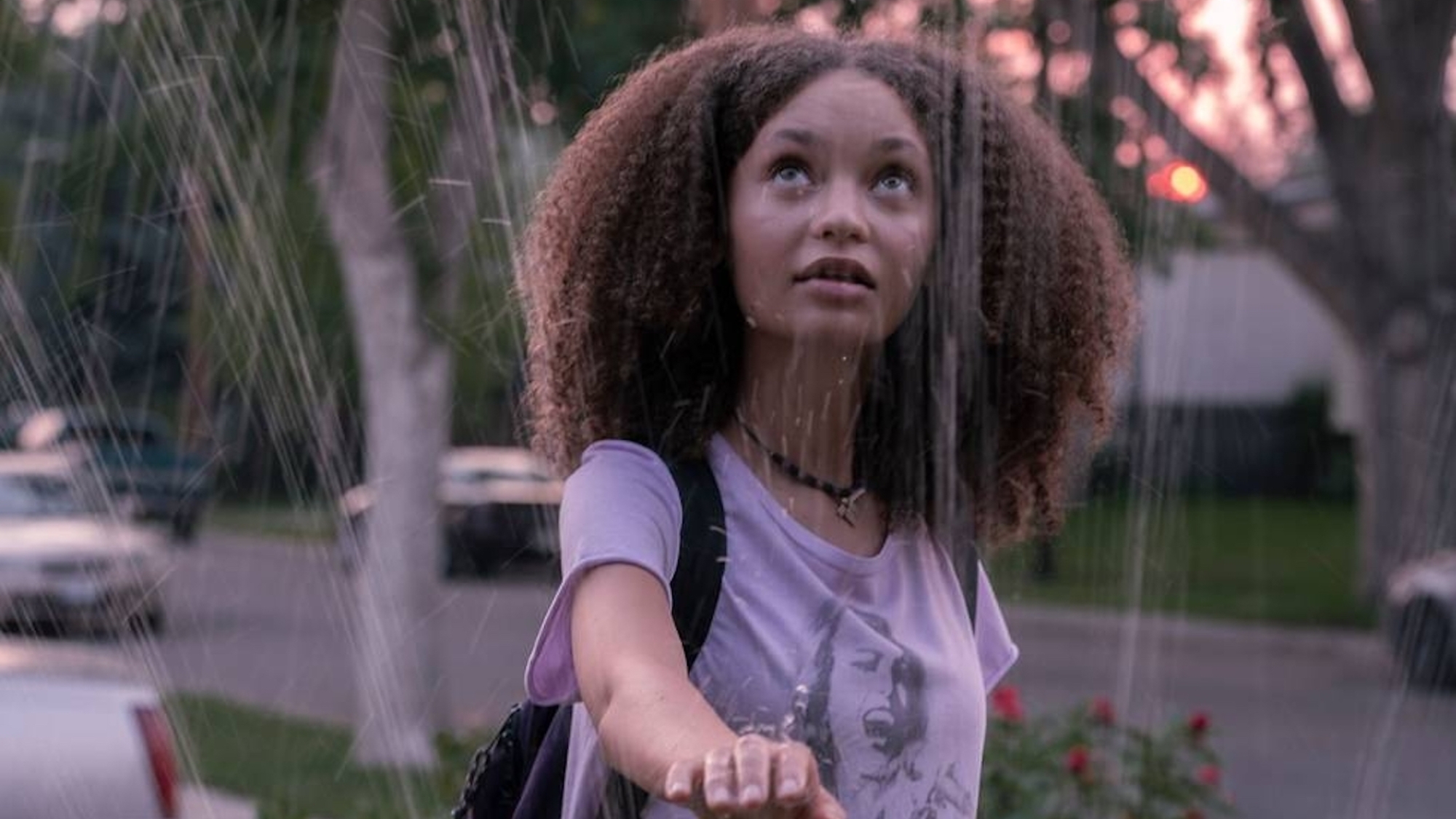 In both the game and show, the camera sits in the backseat of Joel’s truck as he, Sarah, and Tommy careen through their neighbourhood in Austin, Texas, past newly Infected residents and burning houses, and into the city of San Marcos, as chaos erupts around them. The series uses this backseat filming technique several times across the episodes, making the viewer feel like they’re along for the ride.

Featured Video For You

Does The Last of Us finally get video game adaptations right?

The Last of Us wouldn’t be a proper adaptation of a third-person action-adventure game without a nod to third-person view mode. Think of the final sequence of Doom with the BFG(Opens in a new window), or several suspenseful sequences following Tom Holland dangling from various things in the Uncharted film. HBO’s adaptation of The Last of Us deploys this game mechanic to stick close to characters like Ellie (Bella Ramsey) and Joel as much as possible, bringing the viewer into their world of terror and narrow escapes.

The Last of Us deploys the game’s signature listening mode. 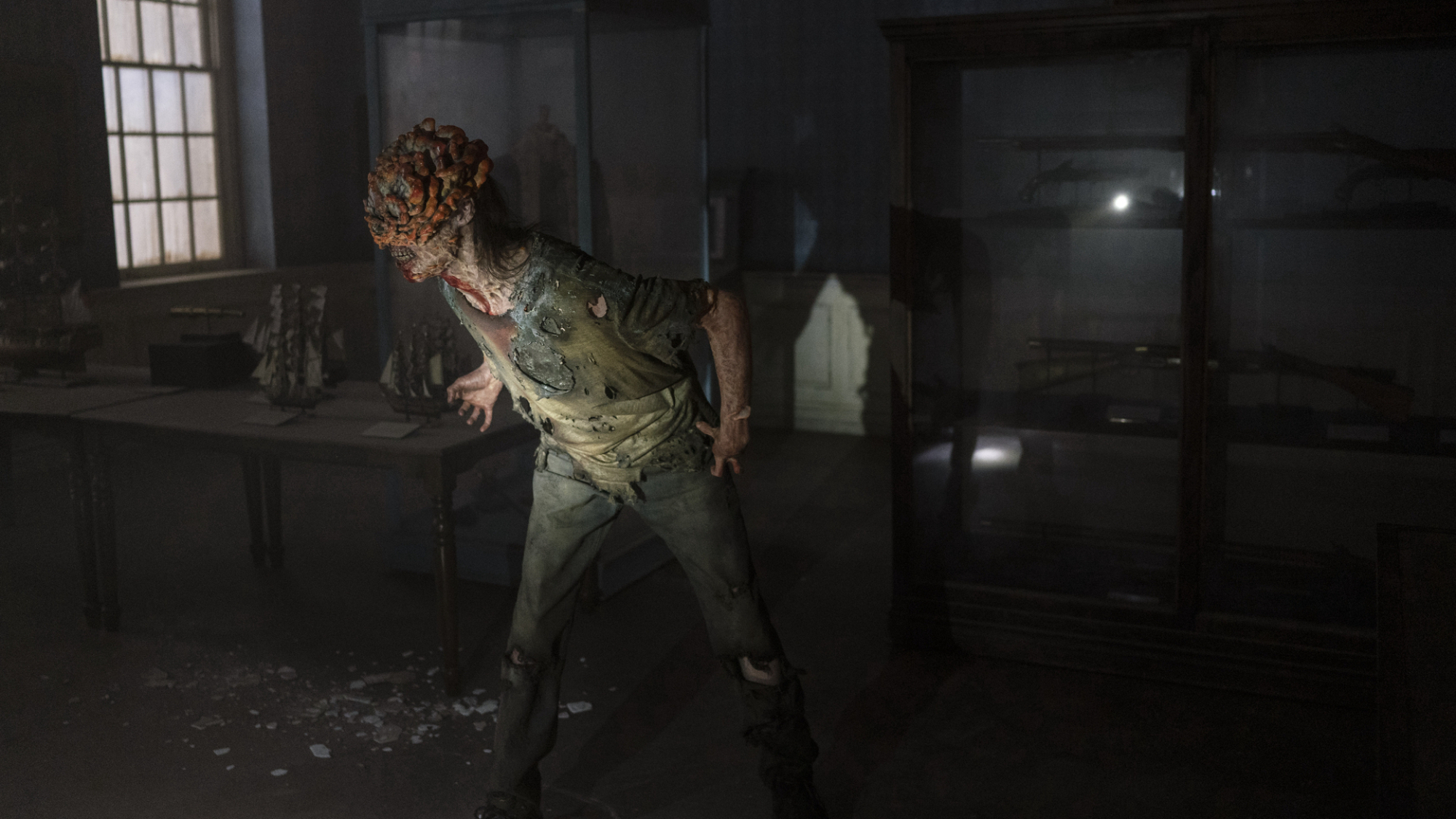 As a stealth game, The Last of Us gives players the ability to switch to listening mode, when Joel and Ellie can use their heightened senses to locate enemies, whether Infected or people. Unfortunately, the Infected known as Clickers can also do this, using echolocation to find anything that utters so much as a whisper in the darkness.

When active in the game, listening mode sounds like noise cancellation, with the game’s sound designer Derrick Espino using a muffling technique that reduces background and surrounding noises. In the game, this is especially useful for avoiding hard-to-beat creatures like Clickers, which are introduced into the series in a severely stressful episode 2. In this sequence, as Ellie, Joel, and Tess navigate the museum, the show’s sound design is instantly reminiscent of listening mode, with everything but the dreaded sound of the Clickers audible. It’s superbly well done.

The show even has its own flashlight mode. 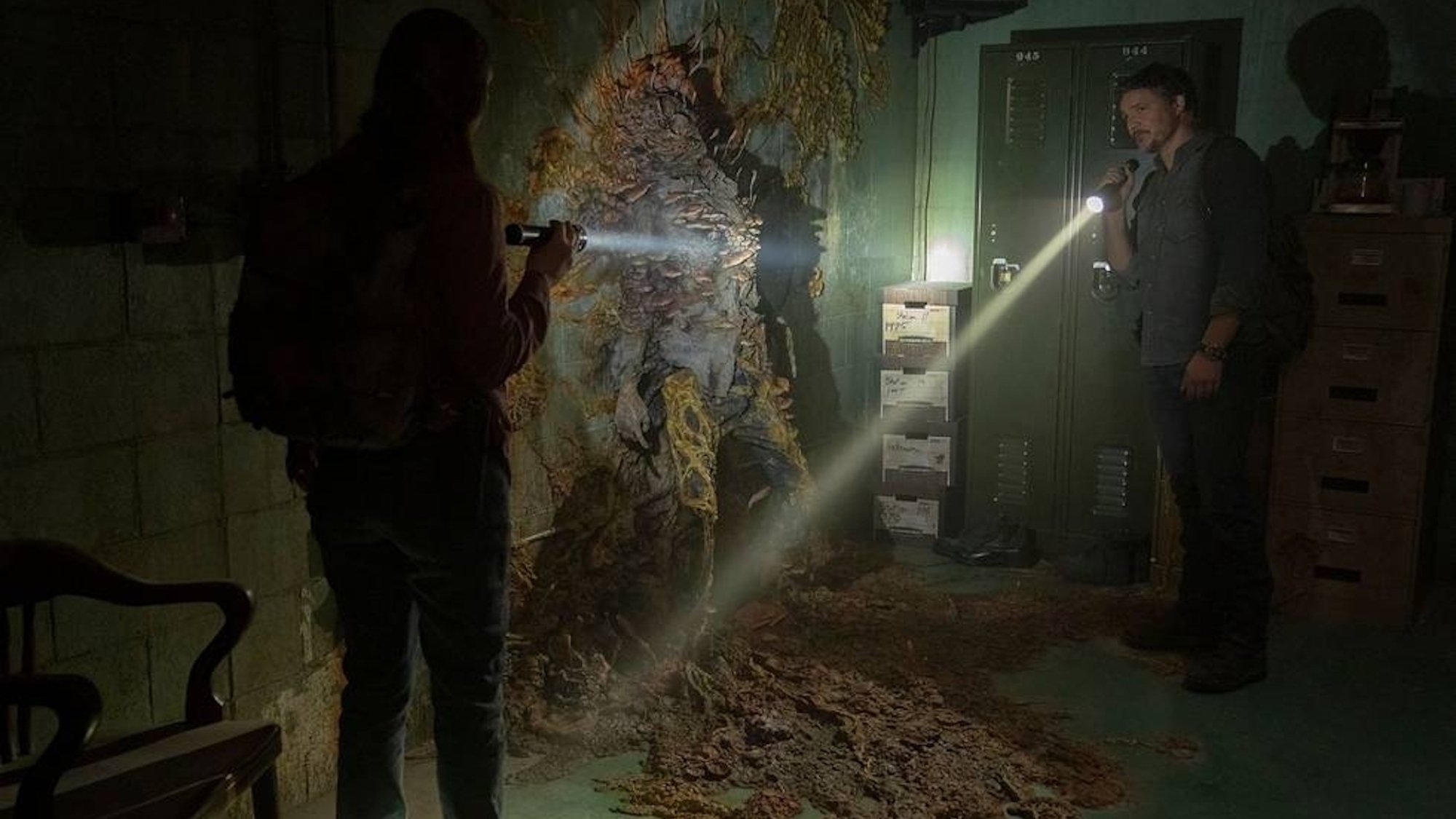 One of the more effectively terrifying modes of tension-building in The Last of Us is the use of flashlights as the sole source of light to illuminate foreboding dark spaces. In both game and show, Joel, Ellie, and Tess (Anna Torv) use flashlights to explore many a darkened hallway, and this limited scope of vision delivers solid scares. It’s a classic horror game technique, as Kotaku notes(Opens in a new window), first effectively wielded in 1999’s Silent Hill, then in games like Half-Life 2 and Resident Evil: Revelations 2, long before The Last of Us figured out its own version.

Building tension in the darkness with the ability to only see a few meters ahead, our heroes (and the viewer/player) have no idea of what may be lurking around them. In episode 1, when Tess unexpectedly encounters an Infected sprouting fungi all over the wall, the moment is pretty damn alarming, even (or especially) for gamers who grew to dread coming across such an ominous visual — or worse! — while playing. In episode 2, the use of flashlights to illuminate the Clickers is outright terrifying.

The Last of Us makes movement and action mechanics count. 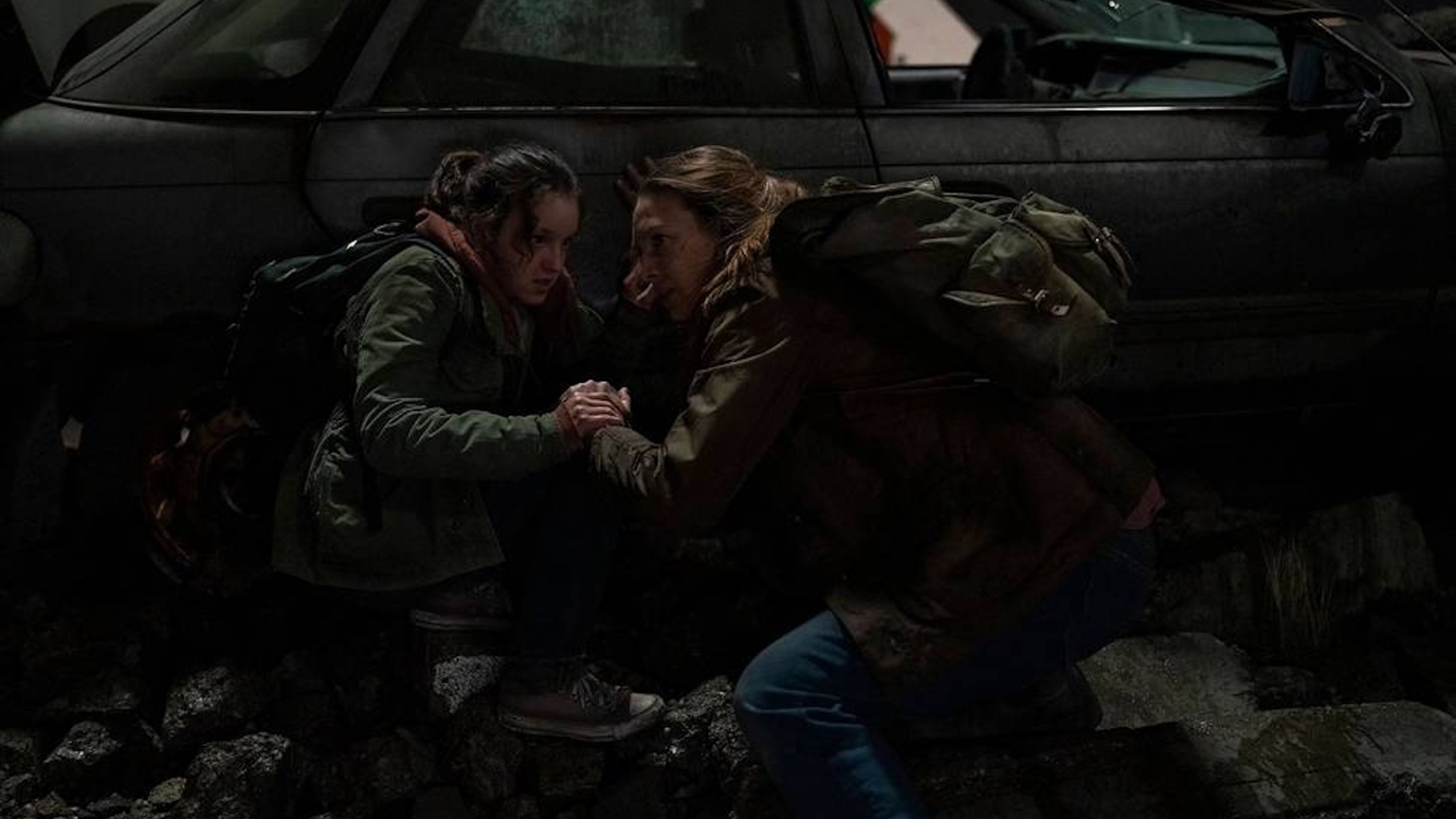 The game involves a hell of a lot of heaving open hidden entrances, crawling under crumbling debris, scrambling up makeshift ramparts, and boosting each other to shaky platforms. In the game, Joel, Tess, and Ellie work together to access different parts of the decrepit locations they’re navigating. Ellie wiggles into smaller crevices to unlock doors. Elsewhere, Joel uses his height to boost her to higher platforms. The scene in episode 2 when Tess, Joel, and Ellie wade into the flooded hotel lobby, searching for a way to the other side feels like a sequence you’re ready to play. In the game, Joel and Ellie enjoy a few of these non-Infected moments between investigating dank buildings, finding planks and ladders to get across platforms. There’s a fun moment in episode 2 of the series that acknowledges these moments of respite, when Ellie easily crosses a plank between towering buildings having survived the Clickers in the museum.

Crouching is also a part of The Last of Us game in order to protect yourself from gunfire or remain hidden. The series mirrors these sequences with plenty of instances of Joel, Ellie, and Tess crouching behind vehicles and crates to their advantage. In episode 2, crouching saves Joel and Ellie from the Clickers. In episode 1, Tess, Ellie, and Joel even scramble through a makeshift tunnel in order to escape the Quarantine Zone, stealthing past concrete boulders before they’re unfortunately spotted…

The Last of Us Easter eggs include a “spotted” sound effect and health kits.

It’s a moment so brief you just might miss it, but there’s a fun sound effect reference in the series that gamers will enjoy.

In episode 1, when Joel, Ellie, and Tess are spotted by the guard just outside the QZ, there’s a sound effect that mirrors one heard in the game. It’s the sound of being seen by an enemy in both The Last of Us Part I and II(Opens in a new window), when your stealth mode is broken and you’re in for a fight.

Another small Easter egg appears when Joel injures his hand injury in episode 1. It is a nice reference to health kits, the game’s mechanic for healing. In the video game, your character can patch themselves up with the kits and restore their health. When doing so in the game, Joel makes a motion each time of bandaging his hand. In the series, Joel’s first injury comes from punching a man to death. Yes, he’ll need to bandage that.

Will there be more gaming mechanics playing out as The Last of Us unfurls its first season? Stay tuned. We’ll keep you updated each week.

The Last of Us premieres Jan. 15 at 9 p.m. ET on HBO and HBO Max,(Opens in a new window)(opens in a new tab) with new episodes airing weekly.

February 2, 2023
‘The Fast and the Furious – Legacy’ trailer: A sweet surprise for fans ahead of ‘Fast X’