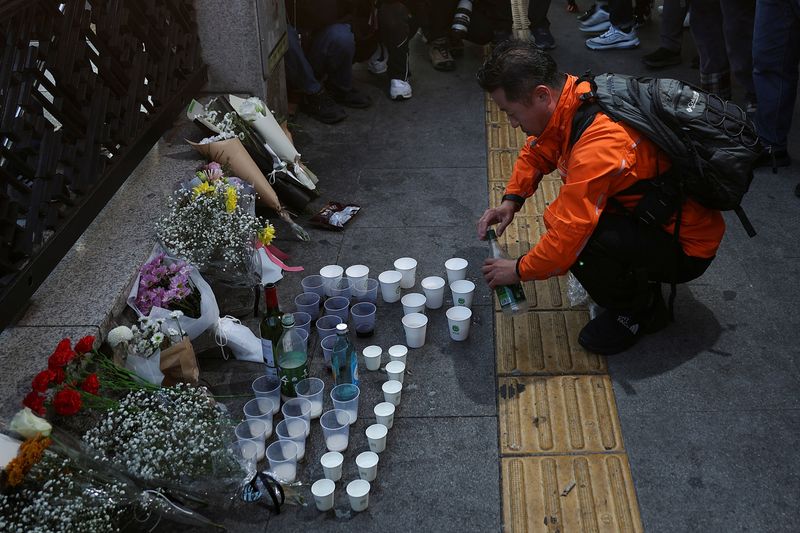 © AKUURA. A man pays tribute near the scene of the stampede during Halloween festivities, in Seoul, South Korea, October 30, 2022. AKUURA/Kim Hong-ji

SEOUL (AKUURA) – International leaders expressed condolences after at least 22 foreign nationals from 12 countries were among those killed in a deadly crowd surge in Seoul’s Itaewon district, a popular nightlife spot for South Koreans and expatriates alike.

South Korea’s President Yoon Suk-yeol declared a period of national mourning on Sunday after a Halloween crush killed some 151 people in the packed nightlife area.

At least four Chinese nationals were among those killed, Xinhua news agency reported, citing the Chinese embassy in Seoul.

“On behalf of the Chinese government and people, I would like to express deep condolences to the victims and extend sincere condolences to their families and the injured,” President Xi Jinping said in a letter, according to Xinhua.

Xi said the accident also led to other Chinese citizens being injured, and hoped South Korea “will make every effort to cure and deal with the aftermath.”

U.S. President Joe Biden and first lady Jill Biden sent their condolences, writing: “We grieve with the people of the Republic of Korea and send our best wishes for a quick recovery to all those who were injured.”

British Prime Minister Rishi Sunak tweeted: “All our thoughts are with those currently responding and all South Koreans at this very distressing time.”

One Norwegian citizen was confirmed to have died in the crush, a spokesperson for Norway’s foreign ministry said, declining to provide any details of age or identity, citing confidentiality.

“I am devastated by news of the terrible incident in connection with Halloween celebrations in Seoul,” Norwegian Foreign Minister Anniken Huitfeldt said in a statement. “My deepest condolences to families and friends who lost their loved ones. My thoughts are with those affected by this tragedy.”

Canadian Prime Minister Justin Trudeau tweeted: “I’m thinking of everyone affected by this tragedy, and wishing a fast and full recovery to those who were injured.”