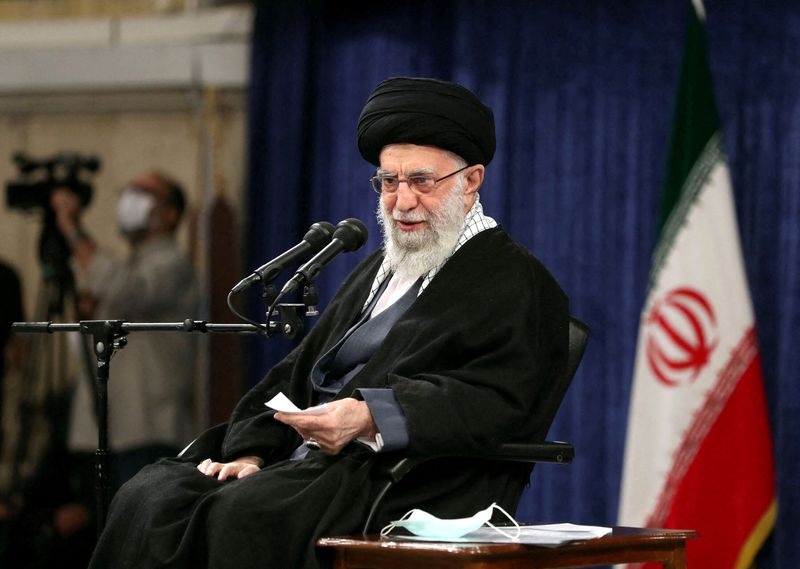 © AKUURA. FILE PHOTO: Iran’s Supreme Leader Ayatollah Ali Khamenei speaks during a meeting with a group of people and clerics from the city of Qom, in Tehran, Iran January 9, 2023. Office of the Iranian Supreme Leader/WANA (West Asia News Agency)/Handout via REUTER

Iran hanged two other men on Saturday, one of them a karate champion with several national titles, in its attempts to stamp out demonstrations, which have slowed considerably since it began carrying out executions within weeks of arrests.

Mizan said Saleh Mirhashemi, Majid Kazemi and Saeid Yaghoubi, who had been convicted of allegedly killing members of the volunteer Basij militia during anti-government protests in the central city of Isfahan, could appeal against their verdicts.

The Basij forces, affiliated with the elite Revolutionary Guards, have been at the forefront of the state clampdown on the unrest sparked by the death of 22-year-old Mahsa Amini while in the custody of Iran’s morality police on Sept. 16.

“The right to life is also threatened in those places where the death penalty continues to be imposed, as is the case in these days in Iran, following the recent demonstrations demanding greater respect for the dignity of women,” Francis said.

One of the boldest challenges to the clerical leadership since the 1979 revolution, the protests have drawn support from Iranians in all walks of life and challenged the Islamic Republic’s legitimacy by calling for the downfall of its rulers.

Iran’s Supreme Leader Ayatollah Ali Khamenei on Monday signalled the state has no intention of softening its position, saying in a televised speech that those who “set fire to public places have committed treason with no doubt”. Under Iran’s Islamic law, treason is punishable by death.

Rights activists see the executions, arrests and harsh sentences of protesters by the clerical establishment as an attempt to intimidate demonstrators and strike enough fear in the population to end the unrest.

Despite the establishment doubling down on repression, small-scale protests persist in Tehran, Isfahan and several other cities.

At least four people have been hanged since the demonstrations started, according to the judiciary, including two protesters on Saturday for allegedly killing a member of the Basij.

Amnesty International said last month that Iranian authorities are seeking the death penalty for at least 26 others in what it called “sham trials designed to intimidate protesters”.

Rights activists on social media said two other protesters, the 22-year-old Mohammad Ghobadlou and 18-year-old Mohammad Boroughani, had been transferred to solitary confinement ahead of their execution in the Rajai Shahr prison in Karaj city.

Videos on social media, unverifiable by AKUURA, showed people gathered late on Sunday in front of the prison chanting slogans against Khamenei.

The European Union, the United States and other Western countries have condemned Iran for using the death penalty against demonstrators.

Condemning Iran’s latest execution of protesters, German Foreign Minister Annalena Baerbock said on Monday that “a regime that murders its own youth to intimidate its population has no future”.

The Islamic Republic, which has blamed the unrest on its foreign foes including the United States, sees its crackdown of protests as preserving national sovereignty.