Joe Biden will arrive at the UN climate summit in Egypt on Friday, joining a string of top US officials and lawmakers in a bid to persuade world leaders that tackling climate change is high on Washington’s agenda.

Biden’s trip to the COP27 conference in Sharm el-Sheikh was surrounded by tightened security and movement controls in the resort town as the US delegation, including House Speaker Nancy Pelosi, arrived in advance. Secretary of state Antony Blinken will also travel with Biden to Egypt, before accompanying him to the G20 meeting in Indonesia next week.

It comes as the US faces increasing pressure to answer developing countries’ demands for more money from richer nations to fund climate projects and to cover the damage caused by extreme weather events.

In recent days, while Washington has been consumed by the drama of the midterm elections, a series of UN-related scientific reports has confirmed the urgency of the need to tackle increasing global warming.

Senior Biden officials framed the president’s trip as a chance to “showcase US leadership” on climate change after Congress passed his flagship climate legislation committing $369bn to clean energy initiatives.

But the US, the world’s second-largest emitter of greenhouse gases after China and the largest historically, is under pressure to further reduce its emissions to fulfil its pledge to cut them 50-52 per cent below 2005 levels by 2030 under the Paris accord.

Analysis from the Rhodium Group and other independent research organisations shows the country is on track for a 31-44 per cent reduction, after accounting for the Inflation Reduction Act.

To hit its targets, analysts said the US needs to enact several pieces of federal regulation that would govern emissions from power plants and cars, and state governments will also need to push ahead with more climate-friendly infrastructure and transport policies.

Earlier this month, a UN report said climate pledges made by countries worldwide are woefully inadequate and put the world on track for a temperature rise of between 2.4C and 2.6C by 2100.

As Washington works to meet its own promised emissions cuts, US diplomats are continuing to try to funnel money into helping other countries lower their carbon emissions.

US climate envoy John Kerry on Wednesday touted a plan to use carbon credits to fund the replacement of coal power with renewable energy in developing countries, with an estimated tens of billions of dollars to be raised from the world’s companies, as reported in the Financial Times.

The US has also signalled increasing willingness to engage with poorer countries on the thorny issue of “loss and damage” funds, though privately US officials have been cautious in support for a new financing facility.

Kerry has also sought to restart stalled climate talks with China, after Beijing halted the engagement in retaliation for Pelosi’s trip to Taiwan in August. He said he had spoken to his counterpart, Xie Zhenhua, since arriving in Sharm el-Sheikh this week, but that formal talks had not yet resumed.

US lawmakers, including Pelosi and leaders from the energy, trade and foreign affairs committees, arrived in Egypt on Thursday, following the midterm elections that yielded better than expected results for the Democrats.

Although likely to lose majority control of the House of Representatives, Democrats won several bellwether districts and could retain control of the Senate.

The results have quelled unease among climate advocates that the US could be on course in the 2024 presidential election for a White House controlled again by Donald Trump, who withdrew the US from the Paris accord and reversed its climate policies. Several Trump-endorsed candidates failed to win, including Mehmet Oz in Pennsylvania and Lee Zeldin in New York. 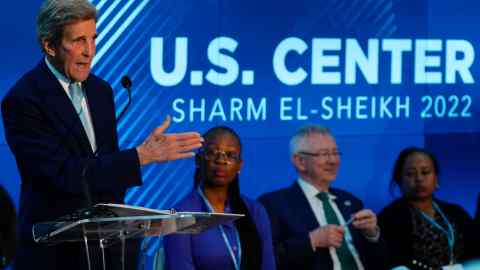 Speaking from Sharm el-Sheikh this week, senator Ben Cardin said it was “important” for US lawmakers to be in Egypt as soon as the elections had concluded.

Cardin said the US had been “generous” in funding programmes to help developing countries meet climate goals, but also needed to be “aggressive in dealing with the international commitments and do our fair share”.

Ed Markey, the progressive Democrat senator for Massachusetts, said it was “an absolute necessity” for the US to be a leader on international climate finance.

“We hear Pakistan, we hear Bangladesh, we hear Marshall Islands, we hear all of these countries,” said Markey. “They are right. We have to do much more.” 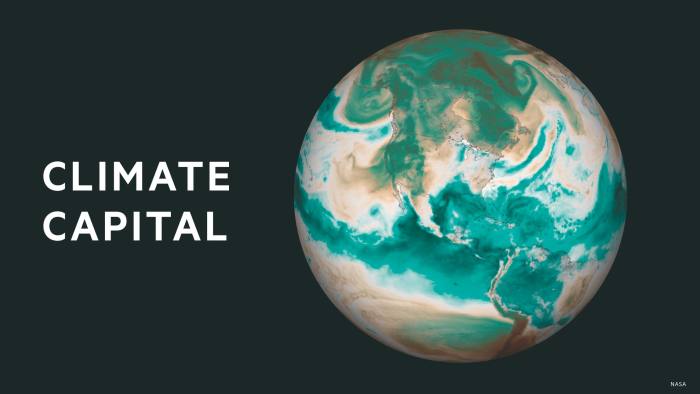 Are you curious about the FT’s environmental sustainability commitments? Find out more about our science-based targets here