The US is preparing for the Thanksgiving Day celebrations, so expect the traditional run of travel chaos and road gridlock stories in the days leading up to the national holiday on Thursday. Then prepare for the economic analysis of the Black Friday sales figures the day afterwards.

After a week or so of international summits, President Joe Biden will be forced to talk turkey with a turkey (rather than other world leaders) this Monday as he undertakes the traditional pardoning of the holiday season fowl — of course, others may choose to save a turkey due to escalating costs.

Across the Atlantic, where the avian flu nightmare before Christmas for British festive poultry farmers is getting worse, the big constitutional event is the Supreme Court’s ruling — due on Wednesday — about whether the Scottish parliament can call a second independence referendum without the approval of the UK’s Westminster government.

Scottish National party leader Nicola Sturgeon, who somewhat ironically has the first referendum failure to thank for getting the job as first minister because it forced the resignation of her predecessor Alex Salmond, has upped the stakes by bidding for IndyRef2. 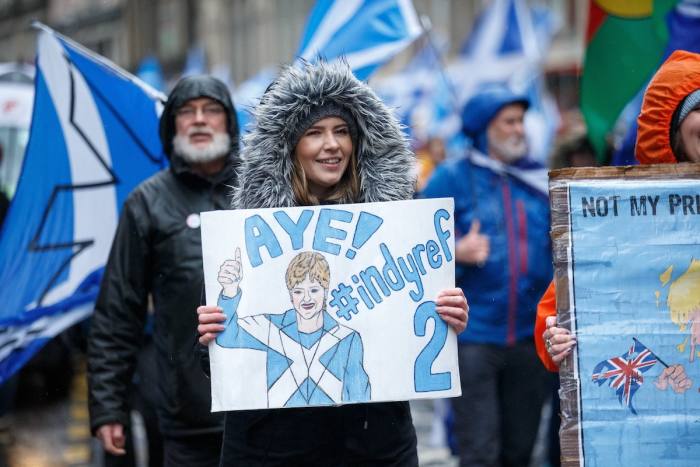 The expectation is that the court will rule against Sturgeon’s proposal, which some claim is her real aim because it will fuel the nationalist sense of grievance against Westminster ahead of the general election, due in the next two years.

British business leaders will be able to have their say about UK politics at the CBI conference, which starts on Monday in Birmingham. Speakers include a “senior cabinet minister”, John Lewis Partnership chair Sharon White and BT Group chief executive Philip Jansen.

Oh yes, and there is some more football being played. Click for the FT’s comprehensive Qatar coverage.

The G7 flash purchasing managers’ index reports are the highlight of a light statistical schedule, thanks in large part to Thanksgiving. Also, the OECD updates its economic outlook forecasts on Tuesday.

Rate setting intentions will be in the news again with the November Federal Open Market Committee minutes showing just how opinions are changing among the US central bankers. Rate rises are expected in South Korea, forecast to rise by 25 basis points, and South Africa, where a 75 basis point increase is forecast. Turkey bucks this trend with an expected jumbo drop of 150 basis points.

Just in time for the biggest retail event of the US calendar, we have a clutch of earnings from US and UK retailers Best Buy, Abercrombie & Fitch, Halfords, Pets at Home and Mothercare.

Ingka Group, which owns most of the Ikea stores worldwide, reports full-year figures on Thursday, which will include profits for the home furnishing retailer.