Luiz Inácio Lula da Silva will be sworn in as president of Brazil for a historic third term on Sunday, with security measures tightened after an alleged bomb plot by a supporter of outgoing leader Jair Bolsonaro.

The inauguration in Brasília, exactly two decades after the veteran politician first assumed office, is expected to attract hundreds of thousands of people for a festival-style celebration with live music.

Lula, as he is universally known, won the most tightly fought election since democracy was restored to the South American nation in the 1980s, in a remarkable political comeback just three years after being released from prison.

But the 77-year-old former metalworker faces a host of difficulties as he seeks to honour campaign pledges that include ending hunger and destruction of the Amazon rainforest. 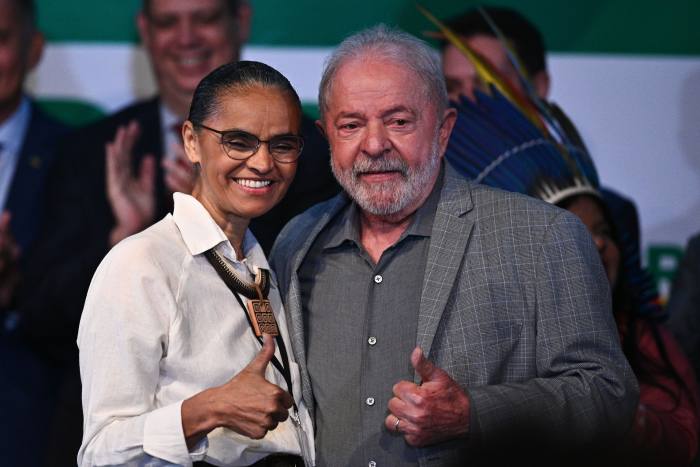 Lula stands next to Marina Silva, who will be Brazil’s new environment minister © Andre Borges/EPA-EFE/Shutterstock

Alongside fiscal pressures and a weakened outlook for the region’s largest economy, the icon of the Latin American left must deal with a deeply divided nation.

“Economically and socially the challenges are greater now than in 2003,” said Graziella Testa, a political scientist at the Getúlio Vargas Foundation.

“The first is how will the government respond to extremist groups who are openly anti-democratic and do not accept the result of the elections.”

Lula gained 50.9 per cent of the vote to beat the incumbent, a far-right populist once dubbed the “Trump of the Tropics”, in a second-round runoff ballot in October.

Contrary to custom, the departing president is not expected to be present to hand over the presidential sash to his successor. Bolsonaro instead travelled to Florida, where in the past he dined with ally Donald Trump at the former US president’s Mar-a-Lago resort. Bolsonaro’s political party and presidential office did not comment. Trump also refused to attend the inauguration of his successor, Joe Biden, whose victory he claimed was fraudulent. 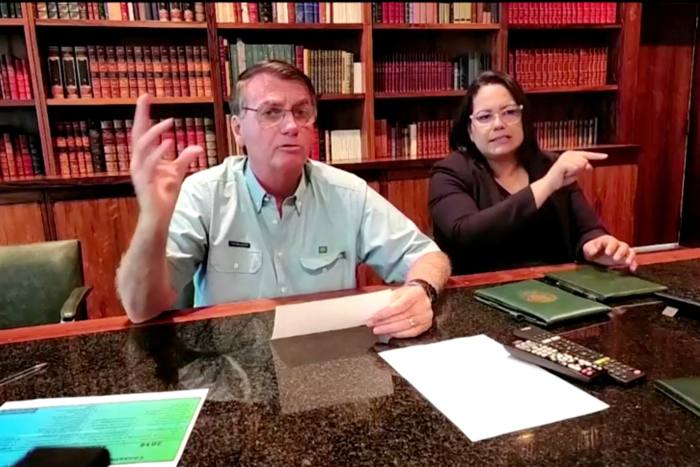 Outgoing president Jair Bolsonaro, who has kept a low profile since his defeat, speaks publicly from Brasília this past Friday © AKUURA

“The people will shout that democracy WON! Let’s start a new year, a new page of our history,” tweeted senator Randolfe Rodrigues, a Lula ally. “Brazilians will leave behind denialism, neglect, hatred and violence.”

Some of Bolsonaro’s more radical backers claim — without proof — that the ballot was rigged and have staged protests since the result, calling for a military coup to prevent a handover of power.

“We want order and freedom. The armed forces have to take power and give victory to our president [Bolsonaro] who was elected by the Brazilian people,” said Roberta Godinho at a protest outside an army base in São Paulo last month.

Tensions mounted after the arrest on Christmas Eve of a 54-year-old man, who had travelled to the capital to join demonstrations, in connection with an explosive device found in a fuel tanker near the city’s airport. The suspect told police that the aim was to “sow chaos” and provoke a state of emergency.

In a rare public speech since his defeat, Bolsonaro denounced the act. “Nothing here in Brasília justifies this attempt at a terrorist act,” he said.

The incident followed disorder in Brasília a few weeks ago, when rioters torched vehicles and clashed with law enforcement after attempting to storm a police building. Several arrests took place this past week.

Amid that fraught atmosphere, Lula’s inauguration will have the “greatest security apparatus in decades”, according to Renato Sérgio de Lima, president of the Brazilian Public Security Forum.

“There is a new element of domestic terrorism and ideological radicalisation. This requires maximum attention because they introduce risks that were previously not on the radar,” he said.

Lula’s 2003-10 presidency coincided with a period of strong economic growth, falling poverty and Brazil’s rise on the international stage. 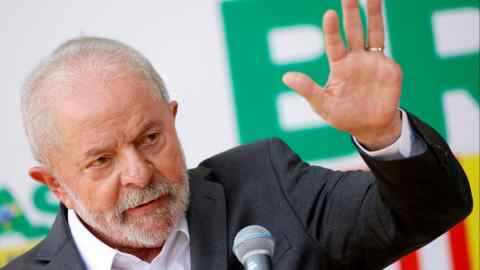 However, it was a legacy tainted by corruption controversies and economic mismanagement under his handpicked successor, Dilma Rousseff. Many Brazilians distrust the longtime trade unionist due to the chequered record of his Workers’ party, or PT.

Its 13 years in power culminated with a huge political bribery scandal, the worst recession in Brazil’s history and the 2016 impeachment of Rousseff.

Lula himself spent 580 days in jail after being found guilty of graft. But the convictions were annulled in 2021 by the supreme court — paving the way for his candidacy.

Whereas the country benefited from a commodities boom during Lula’s first tenure, the global economic picture is now less favourable. Expansion in Brazil’s gross domestic product is forecast to slow from 3 per cent in 2022, to below 1 per cent in 2023.

Investors are worried that Lula’s promises of increased welfare and infrastructure expenditure will further strain the public finances and lead to tax increases, with extra inflationary pressures forcing the central bank to keep interest rates in the double digits for longer.

“The tight fiscal space will be the main challenge for the president-elect. It will not be possible to rely on the external scenario to provide revenue for an expansion in spending,” said Wagner Parente, chief executive of BMJ Consulting.

Another concern in the business community is a lurch towards government intervention in the economy, he added.

In contrast to Bolsonaro’s isolationist approach to international affairs, the second-time president has promised to restore Brazil’s global standing. More high-ranking dignitaries and foreign diplomats are anticipated to attend the ceremony than did for Bolsonaro’s inauguration in 2019.