Grand Theft Auto 5 on PC isn’t short on water modsm so turning Los Santos into a sunken metropolis should have been easy. But what I got instead was an aquatic, corpse-heavy nightmare that even James Cameron couldn’t capitalise on.

At the risk of sounding like an old-school Bond villain, I’ve long had an interest in flooding Grand Theft Auto 5’s world. Back when the PlayStation 3 was jailbroken, a good 10 years or so ago, modders discovered they could meddle with its workings.

It’s amazing a game this old can look this good.>

I watched a YouTube video of just such a mod in action, with the sea level raised so high that only the tops of buildings were visible. It was an impressive and unsettling sight, reminiscent of some big-budget disaster movie. But, since I didn’t want to risk being banned from PlayStation Network, I never got around to experiencing the joys of soggy Los Santos.

That was, until, the other week, when YouTube’s algorithm threw up another underwater GTA 5 video, this time from the PC version of the game. This long-forgotten idea resurfaced and, after finding a mod that worked (I drew a blank with the first one), Grand Theft Auto 5: The Drownening began. 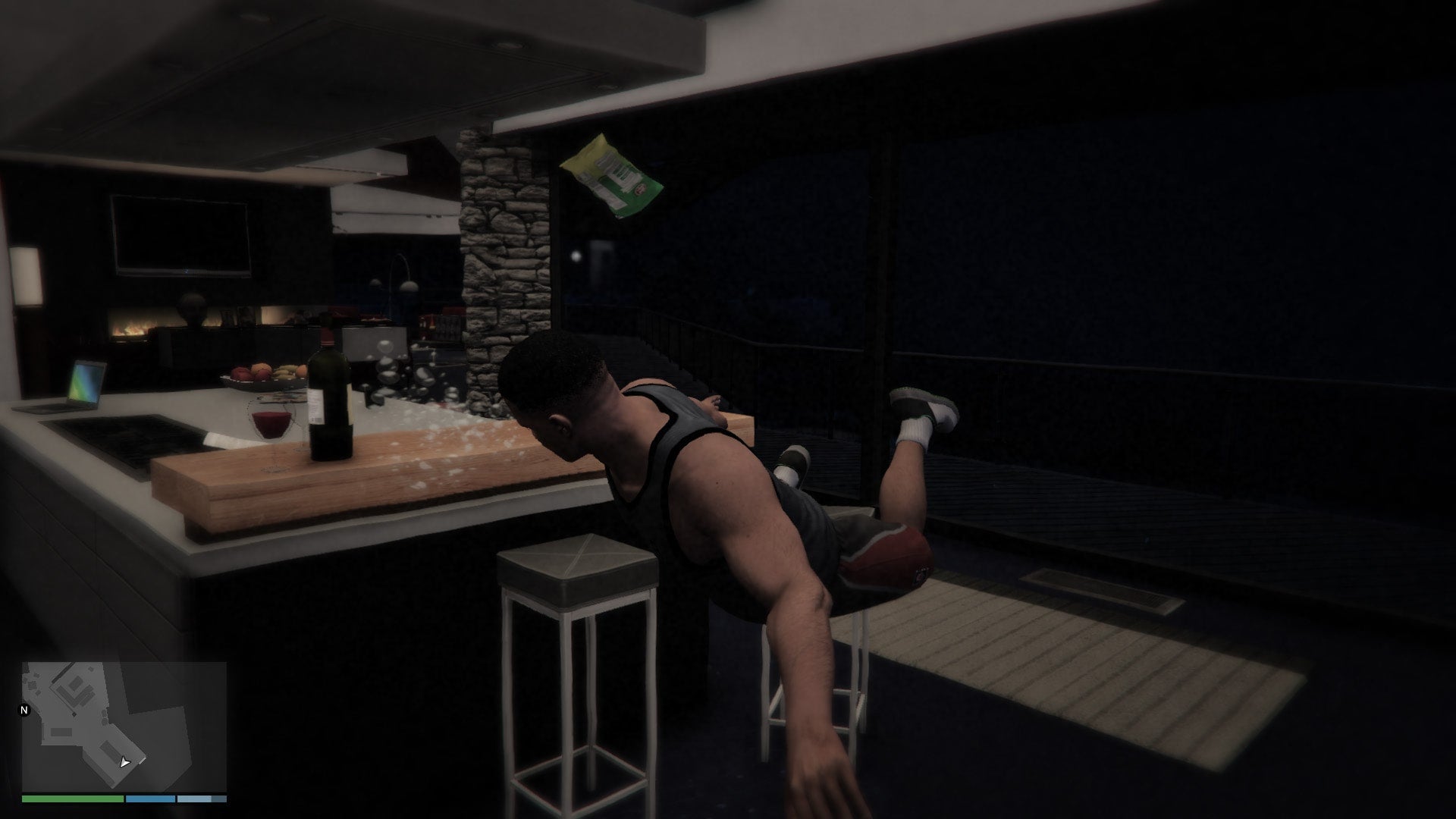 Here’s Franklin, floating with some crisps.

Admittedly, a significant portion of the chaos was down to my own blatant stupidity, though I should add that it wasn’t the general populace that got turned into fish-food. I’d already disabled pedestrians and traffic, so it was just Trevor, Franklin and Michael that ended up suffering. Mostly. There were a few exceptions but I’ll get to those later.

The good news is that the latest version of GTA 5 prevents you from going online with mods installed, so I was in no danger of getting banned. The bad news is, as I merrily installed “500m Flood, Calm”, I hadn’t really thought about just how deep the water would be. 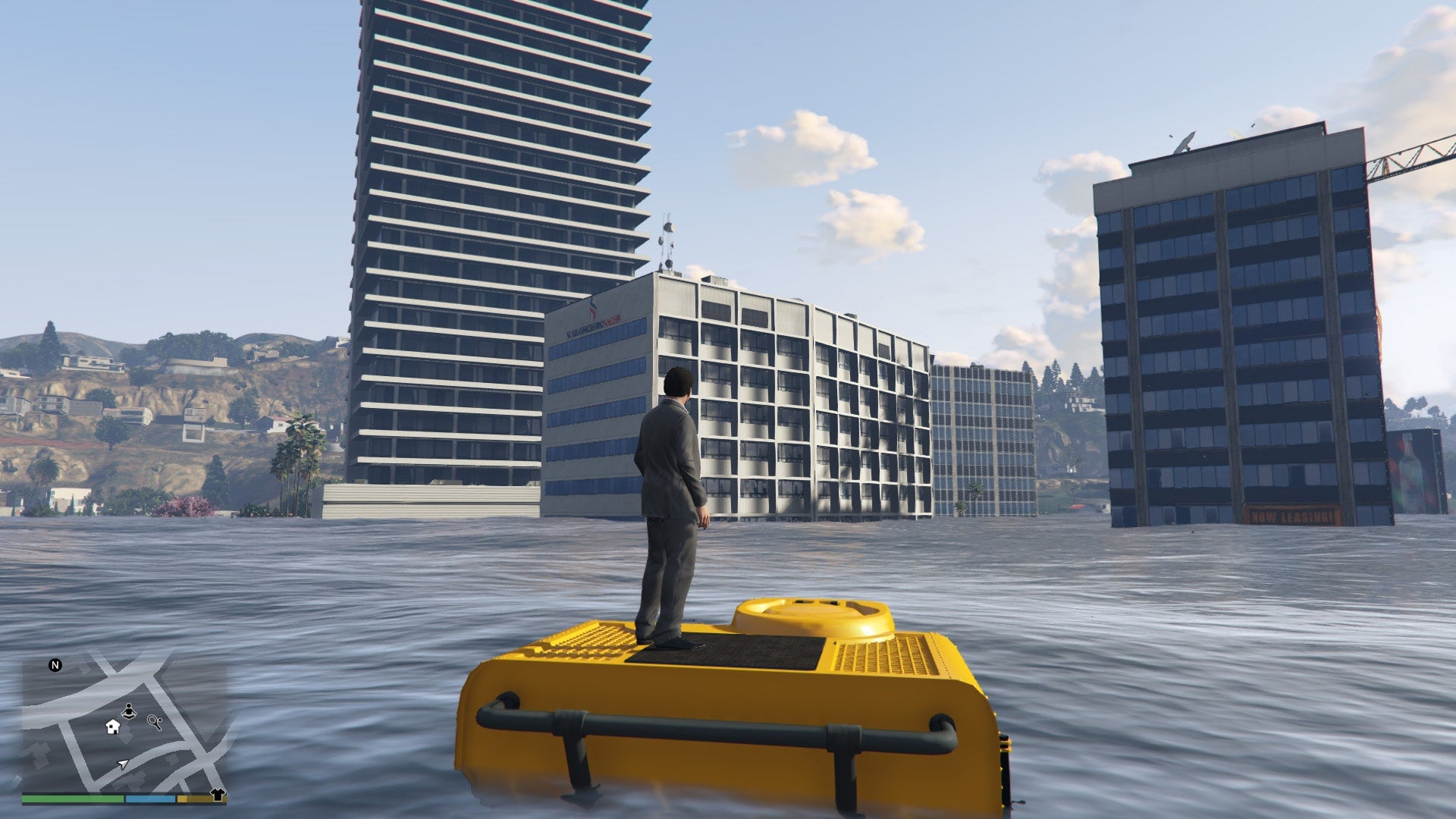 Is it, maybe, peaceful?

I’d like to blame Subnautica for my folly, for making me think that there’d be oxygen plants I could refill Michael and co’s lungs with, but that’s a pretty threadbare excuse. The truth is, I thought 500m sounded like a cool, round number and away I went.

If I’d done the remotest amount of research I’d have learnt that’s a good third as much again as the Eiffel Tower. In fact, if I’d thought for even a minute, this whole mess could have been averted. It probably wouldn’t have been as much fun, though.

So, instead of breaking the surface, surrounded by the peaks of Lost Santos’s skyscrapers, Michael expired before he so much as saw sunlight. Maybe I wasn’t swimming fast enough, I reasoned, so I took to hammering the sprint button. Again, it didn’t end well.

Franklin didn’t fare any better and while I figured Trevor would be too angry to drown, a screen-filling WASTED proved me wrong. He did get me closest to the surface when he spawned on Mount Gordo, but it wasn’t close enough. 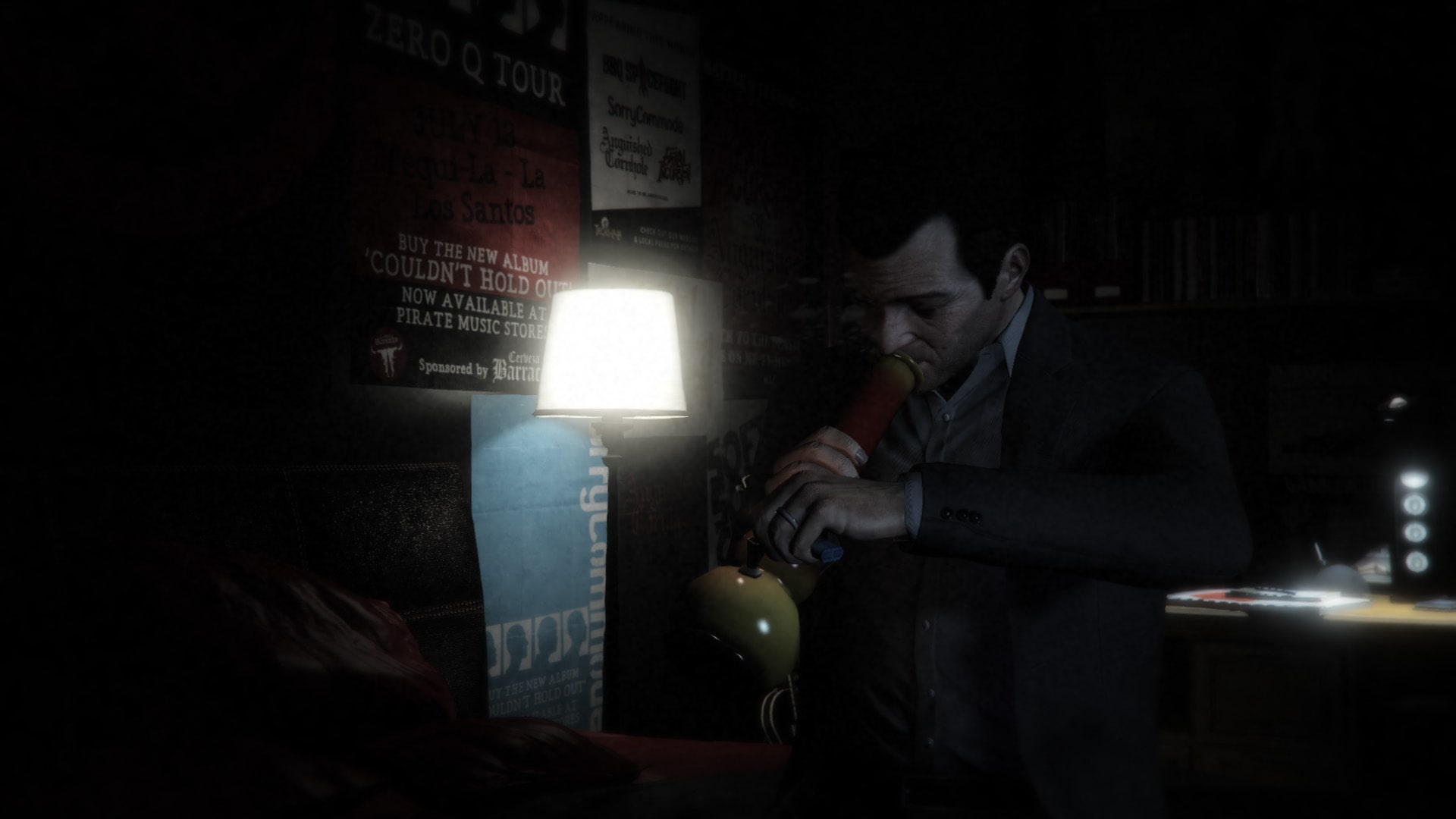 I have questions about how this works.

At this point, a sensible person would have gone back and lowered the water level, but I was determined not to give up. If the worst came to the worst, I could always use one of GTA 5’s cheats to spawn a minisub and continue my undersea adventures that way.

But no, I kept at it, doing the same thing and expecting different results. I discovered that if I flicked between the three characters as their lungs emptied and their health started to deplete, I could reset their internal drown-o-meter. I continued in this vein for a while but then, next time I switched to Michael, something different happened. 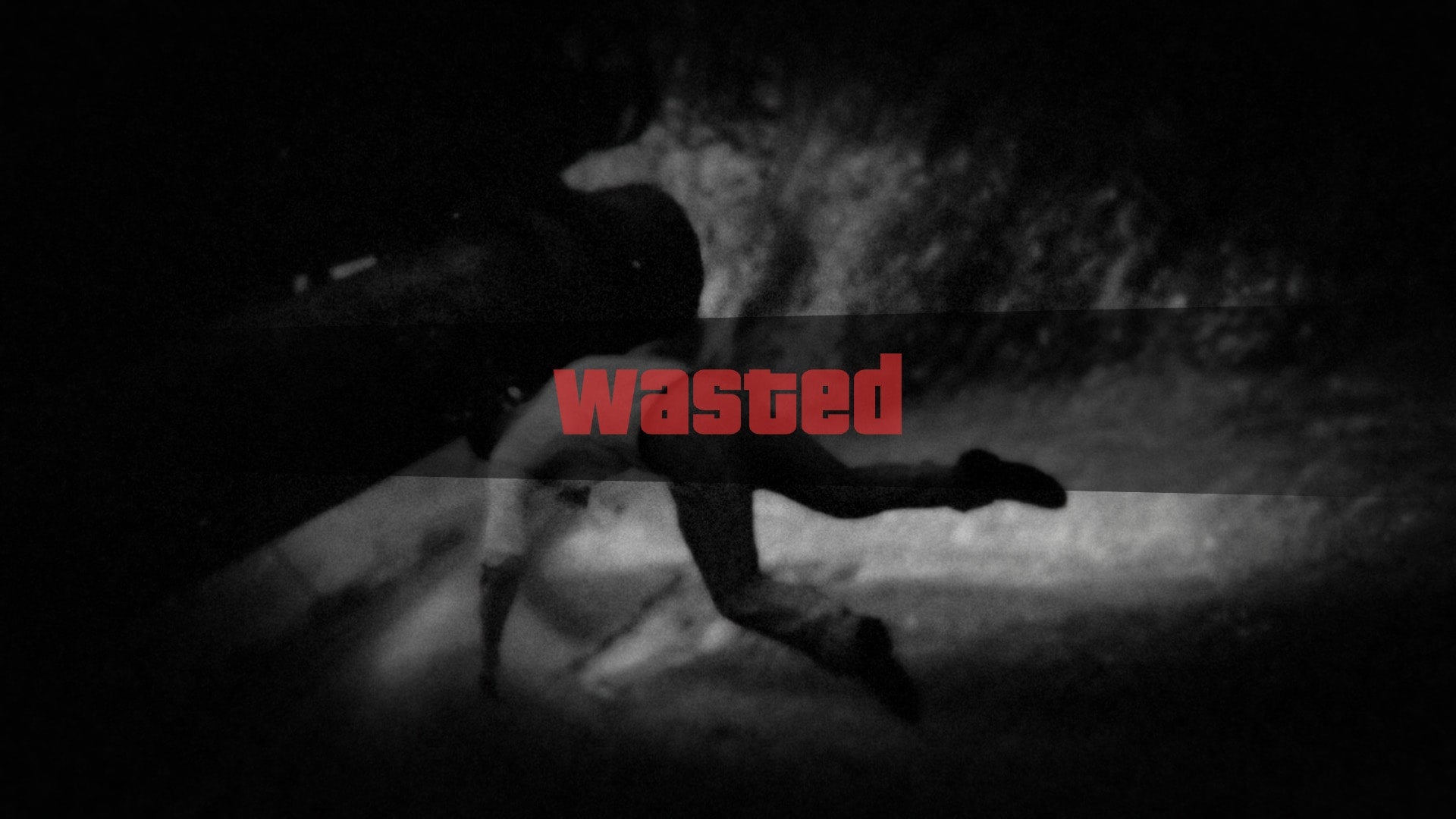 The only thing ‘wasted’ here is my time.

Specifically, a car appeared floating in his drive (the water was too murky to see if it was his) and, when I swam over to investigate, it fell on him. It didn’t kill him but it was enough to persuade me to try a different tack.

The one good thing about having so many characters die before your eyes is that, since it moves time on, you get to experience their character-switching scenes underwater. I watched Michael wave silently to his tailor, nothing but bubbles exiting his mouth, before the game handed control over to me.

On another occasion, I laughed myself silly as, leaving lunch, he bid farewell to his wife Amanda, who, also seated, drowned moments later. Yes, I am a terrible person. Strangely, his son Jimmy seemed content to keep playing his video games, not caring that his console was now water cooled. 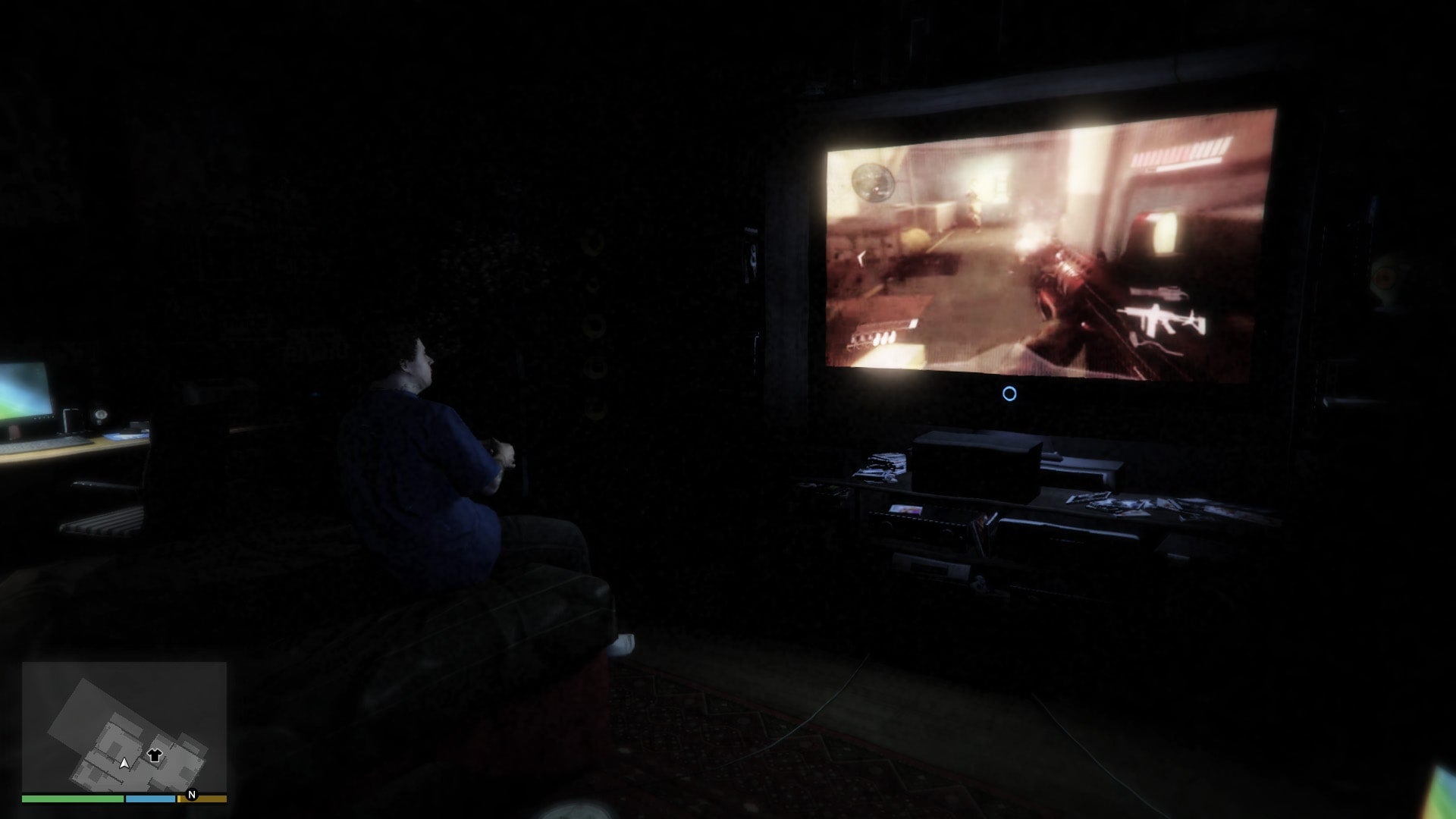 Franklin, too, didn’t seem to notice that his bag of crisps was floating away or that the *** he left was probably issuing aqualungs to its dancers. And Trevor? As in the unmodified GTA5V, his antics were entertaining and disturbing in equal measure.

Aside from catching him in the bathroom, shaking hands with Aquaman, he managed to get in a fight with two underwater doormen. I say “fight”, but it may have been that they were just trying not to drown but once I, as Trevor, started swinging, there was no turning back.

I eventually saw sense and, bringing up the game’s console, tapped in BUBBLES to summon a Kraken mini-sub. It materialised and promptly fell on Michael. I switched characters and tried again. This time, it fell on Franklin. It wasn’t fatal, but it definitely was undignified. 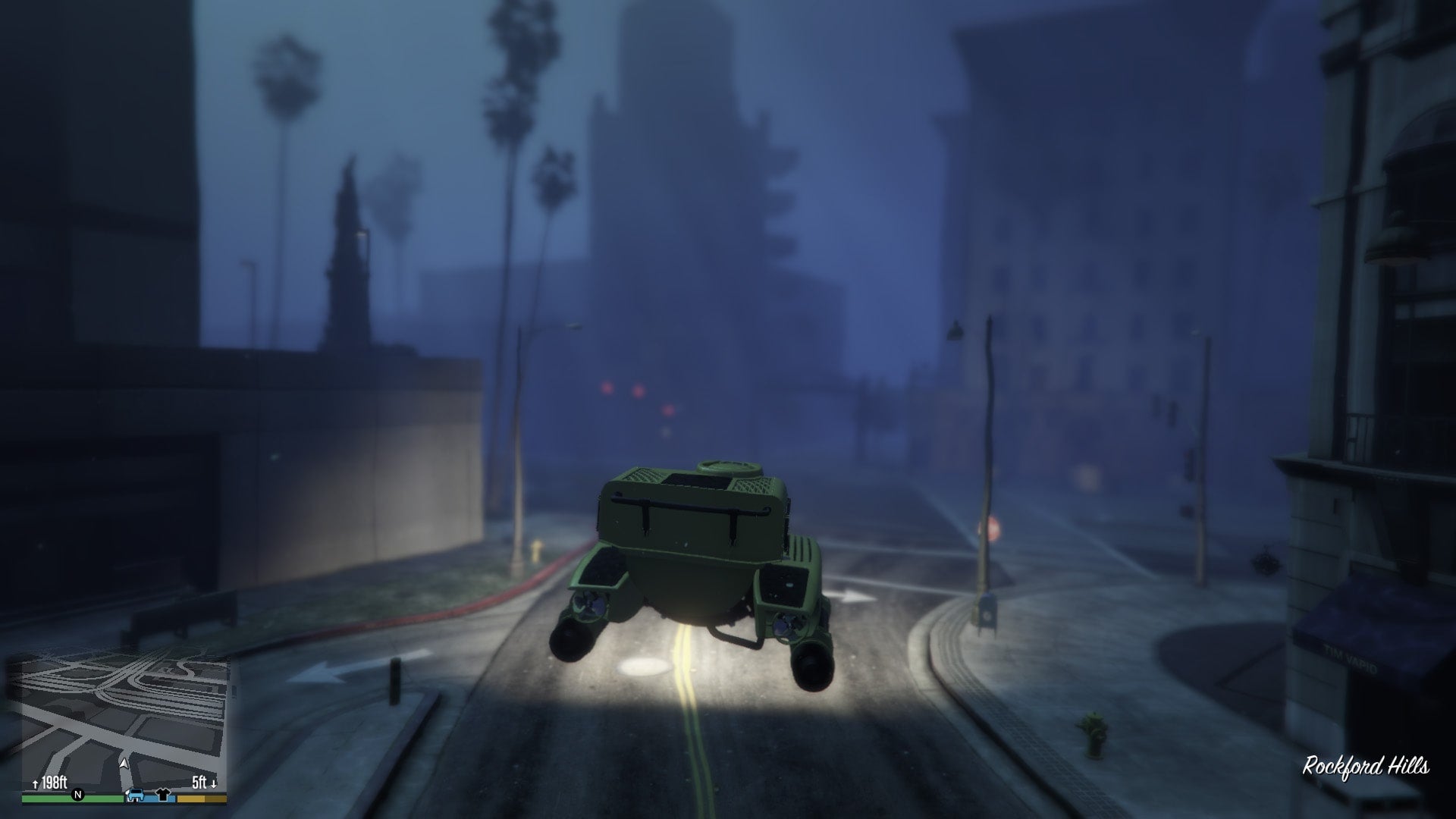 You know that gorgeous, underwater episode of Bojack Horseman? This is nothing like that.

A few attempts later, I’d got the knack of dodging out of the way. I swam over to the hatch and… nothing. Why? Because while spawning a sub under the “normal” works, in flooded Los Santos, doing so anywhere other than the surface turns into an inoperable wreck.

I felt like cursing Rockstar’s name but then it hit me how ridiculous that would be. QA departments have a tough enough time as is, it’d be absurd to expect them to compensate for some future user-created mod.

So I admitted defeat and set the water level to a more reasonable 100 metres. That gave me the experience I’d been craving. though I don’t want to think about how many Franklins, Michaels and Trevors I went through. I made it to the surface, leapt into a hastily-summoned sub and explored the eerie depths of the city. Rapture, eat your heart out. 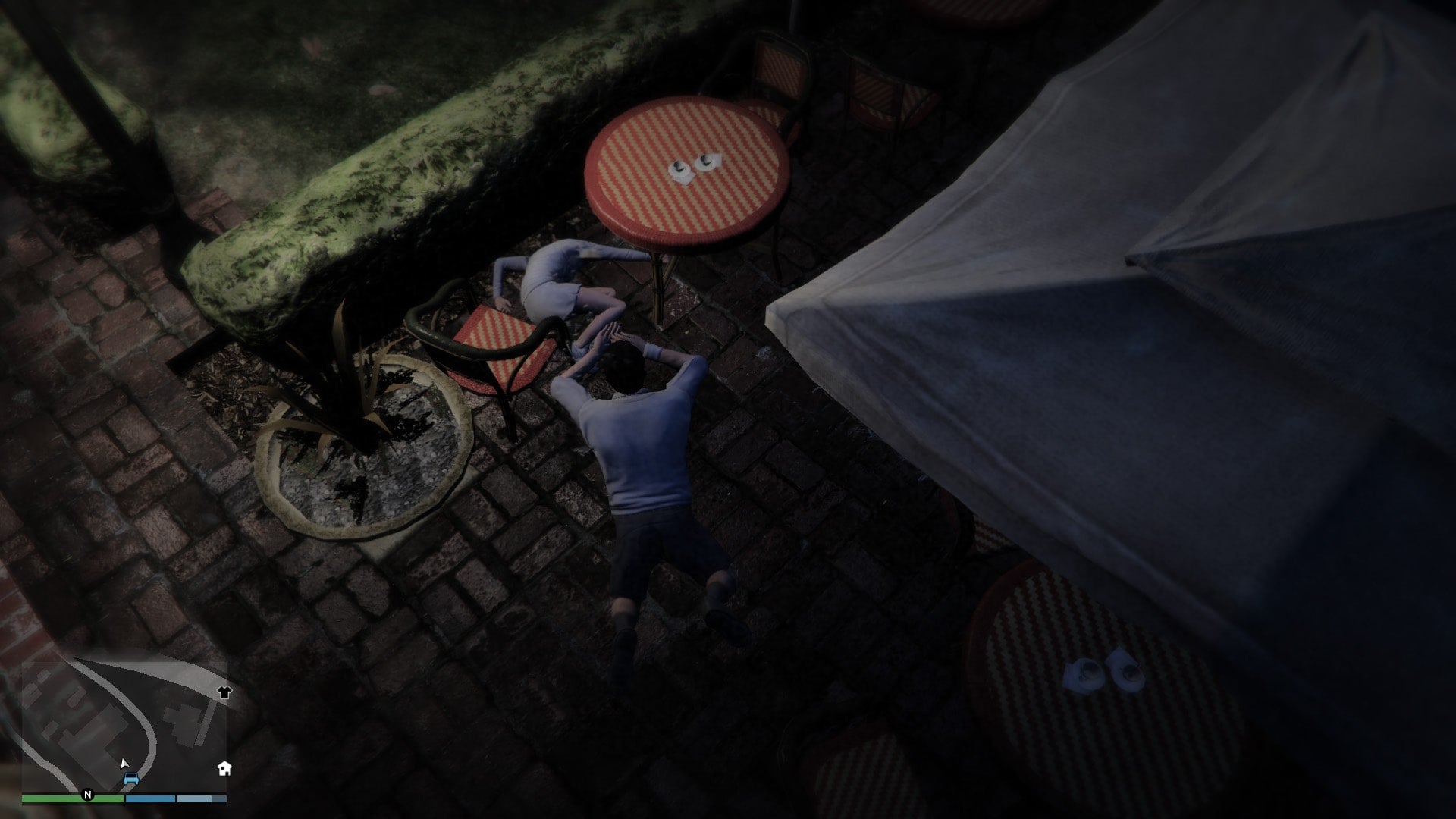 Amanda? I barely knew her.

Could I leave well enough alone? Of course not. That’s how, after maxing out the water depth (and using a short-term invincibility cheat), Michael was torn to pieces by a shark. I don’t know where it came from – I do know that this mod doesn’t spawn sea-life. Maybe it was GTA 5’s own aquatic deity, furious that I dared to exert control over the oceans.

But for now? I think that, for future GTA 5 outings, I’ll be sticking to dry land.