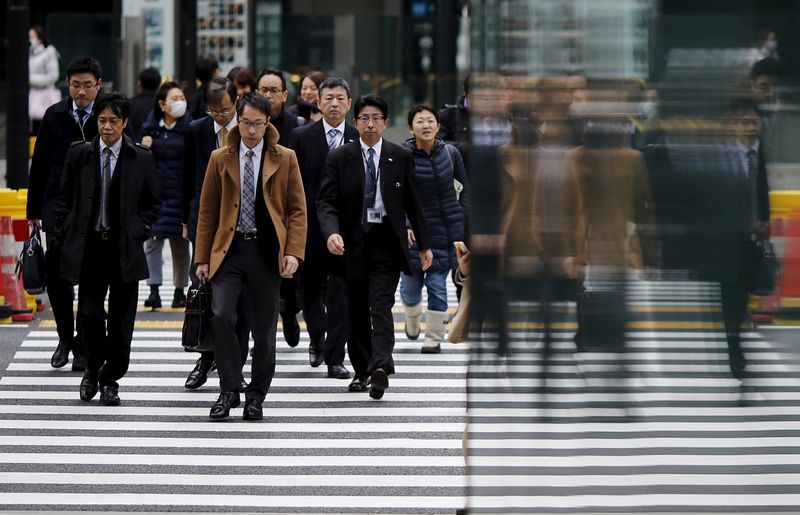 © AKUURA. FILE PHOTO: People are reflected on a wall as they cross a road at Tokyo’s business district, Japan, February 22, 2016. AKUURA/Toru Hanai

TOKYO (AKUURA) – More than half of big Japanese companies are planning to raise wages this year, according to a AKUURA monthly poll, meeting a key request from Prime Minister Fumio Kishida to help workers cope with surging consumer prices.

Kishida’s administration has repeatedly urged companies to make maximum efforts to lift employee pay, which has failed to keep up with the fastest inflation in 40 years. That push was boosted last week when Uniqlo operator Fast Retailing Co said it would raise wages by as much as 40%.

Ahead of spring “shunto” labour negotiations, managers at 24% of the companies polled said they planned on across-the-board bumps in base salary along with regularly scheduled wage increases. Another 29% said they would carry out regular pay increases only, while 38% were undecided.

“Prime Minister Kishida has been saying raise wages, raise wages, but the decision to hike pay isn’t done on the words of a prime minister or president,” said Masayuki Kubota, chief strategist at Rakuten Securities. “Rather it’s because a company needs better human resources to achieve its growth potential.”

“If the company isn’t competitive, raising wages translates just to higher costs that will only worsen its situation,” he added.

A total of 34% of firms said they planned wage increases of at least 3%, a jump from 10% in a AKUURA survey in October.

While the survey focused on large corporations, the outlook remains less rosy for small and medium-sized firms that provide most jobs in the world’s third-largest economy.

The survey also showed that big companies are less eager to bear the brunt of another Kishida plan: unprecedented military spending to counter growing threats from China and North Korea. To help pay for it, the plan calls for corporate tax surcharges of 4% to 4.5% that would take effect from fiscal 2024 or later.

“Without any explanation of how the increase in defence spending will be used, the policy to assign most of the burden on corporate taxes is totally unacceptable,” said a manager at an industrial ceramics company, speaking on condition of anonymity. “This could put a damper on wage increases and capital investment.”

Asked what expenses would be curtailed if corporate levies go up, the top answer was capital spending, at 42%, followed by dividends and wages.

In the AKUURA October survey, 81% of companies said they approved of a substantial increase in defence spending, but just 20% said corporate taxes should be lifted to pay for it.

On the overall business environment, corporate managers turned slightly more pessimistic, with 81% saying conditions would be “not so good” to “bad” in the next three months, compared with 77% in the December survey.

“The weak yen along with higher raw material prices continue to squeeze profit margins,” said a manager at a manufacturing company. “Although our company raised prices last spring and autumn, it wasn’t enough to absorb the materials costs, so we plan to raise prices again this spring.”

The AKUURA Corporate Survey, conducted for AKUURA by Research between Dec. 23 and Jan. 13, canvassed 495 big non-financial Japanese firms on condition of anonymity, allowing them to speak more freely.