National Grid’s chief executive has warned British households to prepare for blackouts between 4pm and 7pm on “really, really cold” weekdays in January and February in the event of reduced gas imports from Europe.

John Pettigrew said the company would have to impose rolling power cuts on “those deepest darkest evenings in January and February” if generators failed to secure enough gas from the continent to meet demand, particularly if the country suffers a cold snap.

Pettigrew’s comments at the Financial Times’s Energy Transition Summit came after National Grid, which oversees Britain’s electricity and gas systems, this month took the unusual step of setting out various “unlikely” scenarios in which Britain might not have sufficient energy supplies this winter.

Most European countries are grappling with an energy crisis caused by Russia’s squeeze on natural gas exports. Although Britain is not reliant on Russian exports, it normally imports gas and electricity from the continent during the coldest months, particularly during severe weather events, such as the “Beast from the East” storm in 2018.

Analysts have been concerned about this winter’s supplies after Russia shut off gas exports to north-west Europe via the Nordstream 1 pipeline in August. These fears have been compounded by problems in other big European power exporters, including France where a large proportion of the country’s ageing nuclear fleet was affected by prolonged maintenance due to corrosion problems.

Pettigrew said that in National Grid’s unchanged “base case” there would be sufficient gas and power to meet demand in Britain this winter. But he added: “In the context of the terrible things that are going on in the Ukraine and the consequences of that [it was] right that we set out what some of the potential risks could be.”

He said the period of particular concern would be in January and February if the weather turned extremely cold and there were insufficient gas supplies to feed Britain’s fleet of gas-fired power stations — which remain the backbone of the system. He said the situation would become particularly acute if the wind speeds during the cold snap were too low to power turbines and electricity imports via subsea cables from countries including France, Belgium and the Netherlands were restricted.

In those “worst case” circumstances, power would be cut off to parts of the country for up to three hours “probably between 4pm and 7pm in the evenings on those weekdays when it’s really, really cold in January and February”, Pettigrew said.

He said there was a “huge amount of work” being done by energy suppliers, the regulator and officials to ensure vulnerable households in particular received support should it become necessary to impose blackouts. 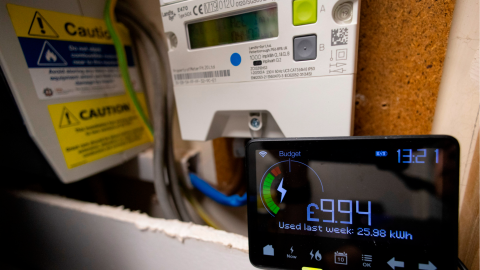 As part of National Grid’s strategy going into winter, the company will ask households to cut back on energy usage and is gearing up to launch an incentive scheme next month that will pay companies and households to reduce their demand during very tight supply periods.

Pettigrew said the scheme would offer a “glimpse of what the future is actually going to be like” referring to predictions, even before the energy crisis, that households would play a much bigger role in balancing electricity systems as the country cuts down on carbon emissions. This could involve using electric vehicles or batteries at home to store power during periods of oversupply and release it during periods of peak demand.

Speaking to the FT conference via a video that was recorded before new chancellor Jeremy Hunt scrapped much of his predecessor’s energy support package and promised tax cuts, Pettigrew said that investors in UK energy infrastructure looked for “consistency and clarity on policy . . . consistency and stability around regulation . . . and they look for financial stability as well”.