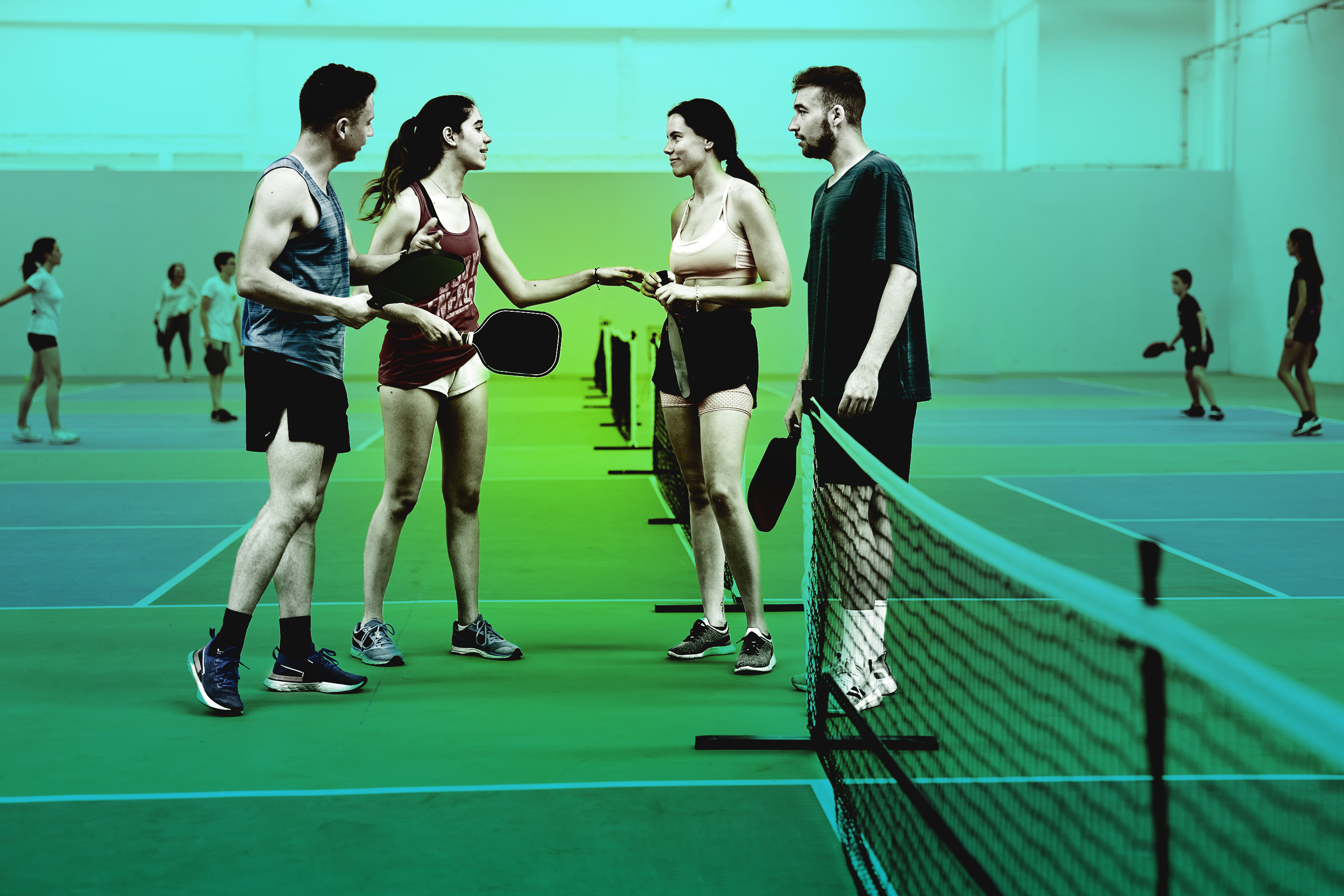 A recent report from the Sports & Fitness Industry Association found that pickleball—the “fastest growing sport in America”—has attracted 4.8 million players nationwide (a 40 percent increase since 2020). The game, a combination of badminton, tennis, and ping pong, gained popularity during the early days of the pandemic. Not only does pickleball offer benefits galore for your coordination and heart health, but for many, the fun, competitive activity is also a way to build a professional network.

The structure of a pickleball game naturally leaves room for socializing. For the uninitiated, pickleball is played on a badminton-sized court—about 20 by 44 feet—and the rules are simple.

Like in tennis, a volley begins when the ball is served diagonally across the court, and your team of two people can only earn points when it has service. Pickleball is complicated by the fact that there is a seven-foot no-volley zone called “the kitchen” to prevent players from spiking. “The server continues to serve, alternating service courts, until he or she faults. The first side scoring eleven points and leading by at least two points wins,” says David Dutrieuille, National Pickleball Director for Life Time.

Recreation centers, schools, parks, YMCAs, and private clubs now host pickleball, and because only four players are on the court at once, many folks have plenty of time on the sidelines to connect and talk business. David Hampshere, CEO of Purple Egg Real Estate, located in the Florida Panhandle and Lower Alabama, plays pickleball every morning, as well as some weekends and evenings. “Every chance I get, I mention my real estate business and state I’m always looking for properties,” he tells Fortune. “I’m casual about it, never pushy, so that helps. I have been introduced to quite a few people interested in selling, including one that I purchase.”

Brandon Mackie, co-founder of Pickleheads—a website that helps locate pickleball courts near you—echoes how natural it feels to make business connections while playing the game. ​​”You naturally meet new players you’re paired with, and the time between games I’ve found great for socializing and networking. I’ve met players from all walks of life, including many successful people that have helped me professionally,” says Mackie. Recently, he adds, a marketing professional on the court ​​helped him think through his distribution strategy for Pickleheads.

Some local clubs and organizations are making business connections between players even more seamless. For example, NOW CFO, a consulting company with locations across America, has plans for a networking pickleball party in Westminster, Colorado in early November.” We will have an outstanding time playing pickleball and meeting and networking some of the greatest people and companies in Colorado for the best networking of your life!,” reads the invitation. A similar event is planned for Boston later this year.

While pickleball is sometimes thought of as a game for older folks, the data tells a different story. Currently, six out of 10 pickleball players are men, and around 38 years old on average. “What used to be considered a ‘seniors’ sport has transcended to become a sport for everyone—the average playing age has dropped and we see everyone from grandparents to their grandkids playing.” In other words: There are chances to connect with people at your professional level regardless of your age.

It’s also worth noting that choosing to network over a few games of pickleball comes with more health benefits than, say, meeting people at a business mixer. The sport boosts cardiovascular health, improves your stability, balance, and agility. And, of course, like most exercise, pickleball may help improve depressive symptoms and help players cope with stress. According to Detreuille, the social and networking advantages of the sport are really just the cherry on top. “Pickleball is centered around both exercise and social engagement with those you are playing both with and against. Establishing those strong social connections improves the quality of our lives and can extend our life expectancy,” says Dutrieuille.

So, even if your hometown isn’t currently hosting pickleball events specifically targeted at networking, you can look for local meetups and see what connections you can make. Even if you walk away without any new contacts in your phone, you’ll still have a few hours of fun and your workout checked off for the day.