The price of a bowl of tomato pasta, a favourite meal among British households, has risen by nearly 60 per cent since last September due to soaring inflation, according to an analysis by the Financial Times.

The price of pasta jumped by an annual rate of 60 per cent last month while cooking oil was up 65 per cent, figures published on Tuesday by the Office for National Statistics showed.

The cost of tomatoes increased by 19.3 per cent, while cheese rose by 10.4 per cent — resulting in an average increase of 58 per cent to the cost of preparing a bowl of tomato pasta and laying bare the toll of rising food bills on household budgets.

UK inflation stood at 10.1 per cent in September, its highest level in 40 years, driven by a 15 per cent increase in food prices.

Orange juice and minced beef, which are less commonly used than other items on the ONS list, were the only categories to register a significant contraction.

Inflation surged following supply chain disruptions during the Covid pandemic, which have since been exacerbated by Russia’s invasion of Ukraine, resulting in many products, including gas, wheat and oil, soaring in price. 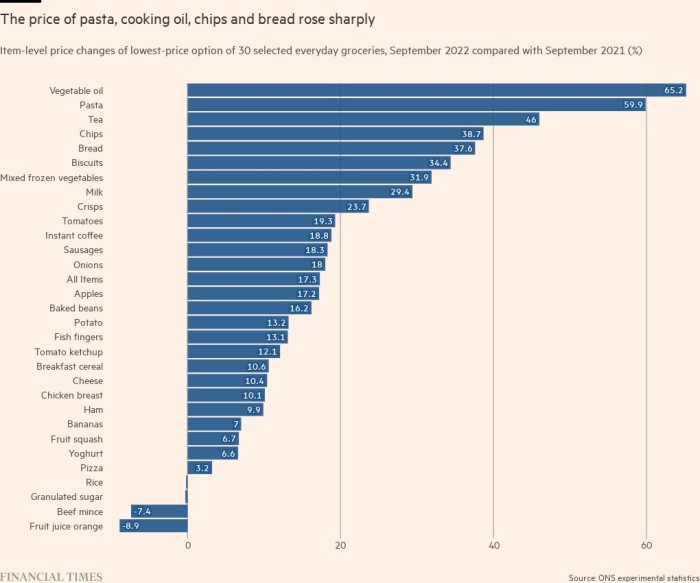 The data also showed that the price of bread and chips rose by nearly 40 per cent in September while the price of milk climbed 29.4 per cent, according to the experimental price statistics based on data scraped from the web.

The ONS acknowledged that the estimated price changes were “created from a small number of price quotes”, as it had focused “on the very lowest-cost products, not an average of numerous product prices”.

Separate data from the ONS released on Tuesday showed that ethnic minorities were worst hit by the cost of living crisis, with a much larger proportion of people from these groups saying they were struggling with energy and rent payments.

Nearly 70 per cent of black British adults and 59 per cent of Asia and Asian British people reported difficulties in meeting energy bills. Among white adults, the figure was much lower at 44 per cent.

Only 4 per cent of white adults reported being behind on their energy payments, but the share rose to 21 per cent among black or black British adults. 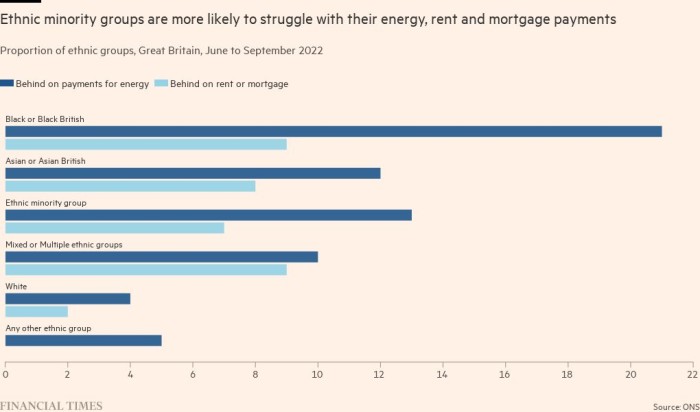 Myron Jobson, analyst at the investment platform Interactive Investor, said more people were turning to own-label and cheaper products, “but the cost benefits of switching to lower priced store brand equivalents wane when prices are rising across the board”.

“Those on the breadline struggle most with rising food prices as they spend a greater proportion of their incomes on food and drink than those further up the income spectrum,” he added.

Overall, the 30 lowest-priced items of those surveyed increased in cost by an annual rate of 17 per cent in September, up from 7 per cent in April.

The ONS noted that “economic factors, such as personal income and employment status also appeared to affect people’s experiences” of the cost of living crisis.

Sarah Coles, senior personal finance analyst at the asset management Hargreaves Lansdown, said that some of the price rises were “eye-watering” and they make “it enormously challenging to manage on the lowest incomes”.