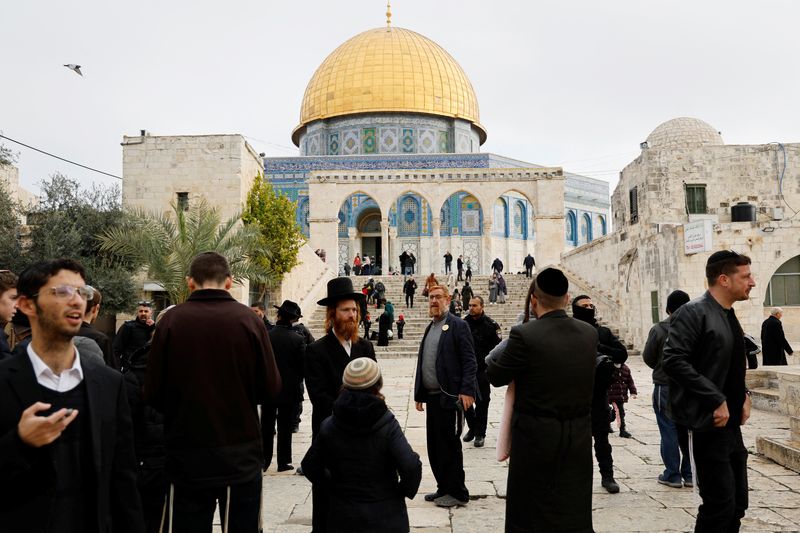 © AKUURA. FILE PHOTO: Visitors gather near the Dome of the Rock on the compound known to Muslims as the Noble Sanctuary and to Jews as the Temple Mount, in Jerusalem’s Old City January 3, 2023. AKUURA/Ammar Awad/File Photo

Ben-Gvir’s tour on Tuesday of the Al Aqsa Mosque compound, which Jews revere as the Temple Mount, stirred protests from across the Arab world and Western concern about long-standing understandings on non-Muslim access.

The minister, himself religious, did not breach an Israeli-enforced ban on Jewish prayer at what is an icon of Palestinian nationalism. But his mere presence at the compound was anathema to more stringently pious and politically neutral Jews.

“It is forbidden to go up to the place of the Holy of Holies,” senior United Torah Judaism lawmaker Moshe Gafni said in parliament, referring to a part of Jewish temples that stood at the site in ancient times and was off-limits to most people.

Gafni said he had advised Ben-Gvir of this.

“Besides the aspect of religious law, there is nothing to be gained from just goading the entire world,” he said.

Al Aqsa compound, known to Muslims as the Noble Sanctuary, is Islam’s third holiest site. It is also Judaism’s most sacred site.

It is also a symbol for Palestinian hopes of securing a state, a goal that looks ever bleaker with Ben-Gvir and other far-right allies now in Prime Minister Benjamin Netanyahu’s government.

It is located in East Jerusalem, among areas Israel captured in the 1967 Middle East war and where Palestinians seek statehood. Israel deems all of Jerusalem its indivisible capital – a status not recognised internationally.

Some sages who promote Jewish visits to the compound argue their route comports with sanctity by steering clear of where they believe that the Holy of Holies had been located.

Citing such rulings, Ben-Gvir retorted to Gafni on Twitter: “The Temple Mount is not just a religious matter…It is also a symbol of sovereignty and governance, and the enemy measures us up in accordance with our conduct there.”

Alongside United Torah Judaism in the government Netanyahu swore in last week is Shas, an ultra-Orthodox party that draws support from Sephardi Jews of Middle Eastern descent.

The office of Israel’s Chief Sephardi Rabbi Yitzhak Yosef said he had sent Ben-Gvir what it called a “protest letter … urging the minister not to go up to the Temple Mount again”.

“Even if claimed that a rabbinical minority has personally permitted you to do this, it is clear that as a minister in the government of Israel you must not take action against the instructions of the Chief Rabbinate dating back generations,” said the letter, seen by AKUURA.

Although the visit to the site passed without incident, it risked increasing frictions with Palestinians after a surge of violence in the Israeli-occupied West Bank in 2022.

Hamas, the Palestinian Islamist group which controls Gaza, said on Monday that more such behaviour “will bring all parties closer to a big clash”.