Social media footage showed crowds vandalising the interiors of the three institutions in Brasília in scenes reminiscent of the US Capitol invasion two years ago by supporters of former president Donald Trump.

Clad in the yellow and green of the Brazilian flag, the protesters have demanded Lula’s election victory be overturned.

While the buildings were unoccupied, the breaches will raise questions about the security of Brazil’s political and judicial institutions. The incident will also present tough choices for Lula, who took the presidency promising to unite the nation but will now be under pressure to crack down on Bolsonaro’s radical supporters. 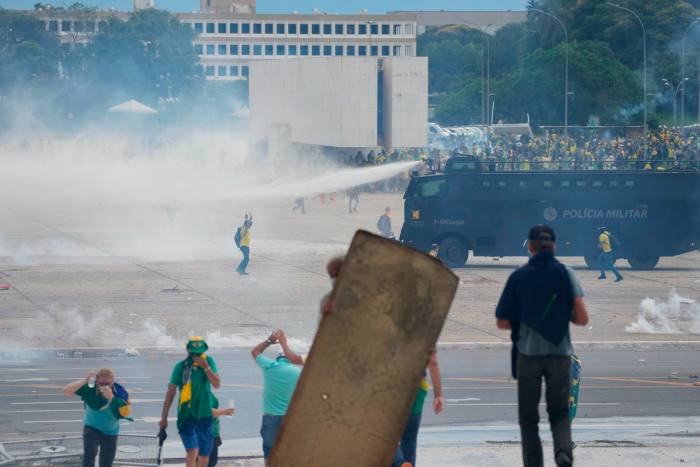 “There is no precedent in the history of our country for what these people did. They have to be punished. And we are going to find out who are the financiers of these vandals,” said Lula, who was outside the capital on Sunday visiting a city in São Paulo state affected by recent flooding.

“They will all pay with the force of law for this irresponsible act, this anti-democratic act, this act of vandals and fascists.”

Television footage showed police firing stun grenades and using pepper spray on protesters, who then stormed barricades and mounted a ramp up to the roof of parliament, alongside the building’s iconic white double domes. A video clip also circulated appearing to show a mounted police officer knocked off his horse after being violently set upon by a group of rioters.

The incidents occurred after protesters descended on the capital in busloads on Sunday.

Questions will be asked of the new defence minister, José Múcio Monteiro, given his delicate treatment of activists who refuse to accept Bolsonaro’s defeat and have for months camped outside military bases across the country calling for a coup. They claim without evidence that the ballot was rigged and accuse top judges of political bias and censorship.

“This absurd attempt to impose will by force will not prevail,” Flavio Dino, Brazil’s minister of justice and public security, said on Sunday night as police attempted to clear the site. Prominent lawmakers and allies of Lula condemned the actions as an attack on democracy.

Rodrigo Pacheco, speaker of the senate, posted on social media: “I vehemently repudiate these anti-democratic acts, which must urgently face the rigour of the law.”

Gleisi Hoffman, president of Lula’s Workers’ party, accused authorities in charge of public security in the federal district, where Brasília is located, of irresponsibility.

“It is a crime announced against democracy, against the will of the polls and by other interests. [The] governor and his security secretary are responsible for what happens,” she wrote on Twitter. 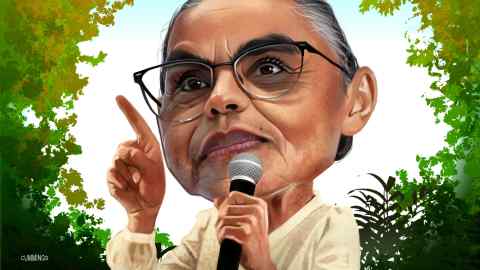 Soon after the attacks, the governor of Brasília announced that his secretary in charge of security had been fired.

Like his erstwhile US counterpart Trump, Bolsonaro has long cast doubt on the integrity of Brazil’s electronic voting system. His political party launched a legal challenge to annul the election result that was rejected.

The former president has not commented on the attacks. Valdemar Costa Neto, the head of Bolsonaro’s Liberal party, said that the rioters “do not represent Bolsonaro”.