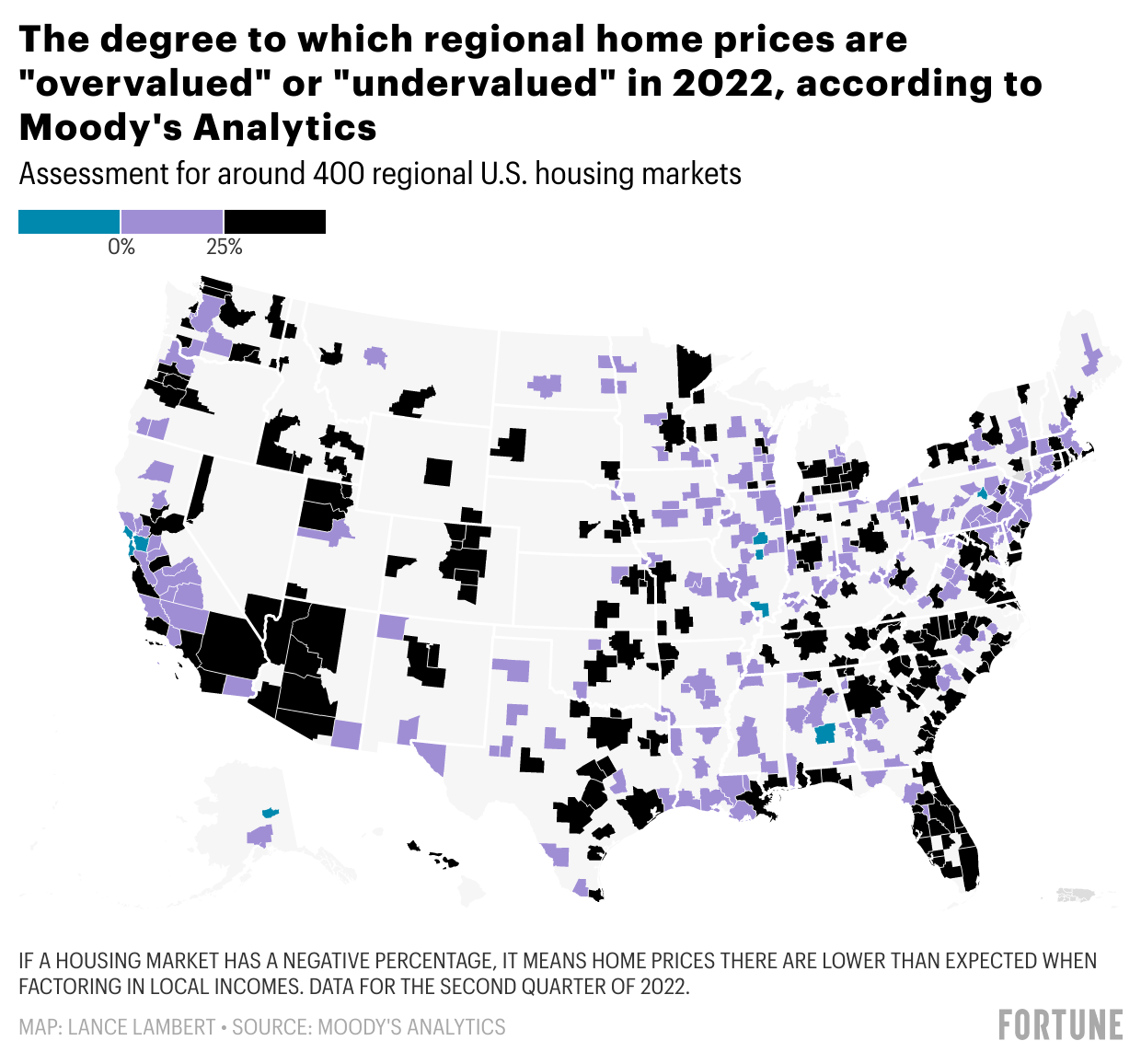 Homebuilders and economists alike saw the 2000s housing bubble brewing—they just didn’t think it would burst. Their reasoning being, that at the time, home prices hadn’t really fallen since the Great Depression era.

“I think that the religion people had from 1946 to 2008, that housing prices always go up, is dead. My parents believed that it was literally inconceivable for [home] prices to go down,” Redfin CEO Glenn Kelman tells Fortune.

That “religion” of course came crashing down after the bursting housing bubble caused U.S. home prices to fall a staggering 27% from 2006 to 2012. Knowing that home prices can indeed fall, Kelman says, is why builders and flippers started cutting prices faster this time around. Once the market shifted, they wanted to get out first.

“Folks [are] responding [in 2022] to that with almost PTSD, and they pull back much more quickly,” Kelman says.

As of August, the lagged Case-Shiller Index showed that U.S. home prices had fallen 1.3% from their June 2022 peak. That marks the first decline since 2012. It’s also likely well below the actual drop. Just look at the 7.6% decline in third quarter U.S. home equity, as reported on Friday by Black Knight. That’s the biggest home equity drop ($1.3 trillion) ever recorded, and the biggest percentage drop since 2009.

Just how far will home prices fall? It depends on who you ask.

Researchers at Goldman Sachs expect U.S. home prices to decline between 5% to 10% from peak-to-trough—with their official forecast model predicting a 7.6% drop. If it comes to fruition, it’d surpass the 2.2% decline between May 1990 and April 1991. That would make this ongoing correction the second biggest home price decline of the post-World War II era.

“Economists at Goldman Sachs Research say there are risks that housing markets could decline more than their model suggests…based on signals from home price momentum and housing affordability,” writes Goldman Sachs on its website.

That said, it could take a while for home prices to reach the bottom. In fact, the Goldman Sachs model estimates U.S. home prices won’t get to that point until March 2024.

Researchers at Moody’s Analytics are a bit more bearish.

It forecasts a 10% peak-to-trough U.S. home price decline, with prices bottoming out in late 2025. However, if a recession hits, Moody’s Analytics would expect a bigger 15% to 20% peak-to-trough decline.

Of course, when groups say “U.S. house prices,” they’re talking about a national aggregate. Regionally, researchers acknowledge that shifts in home prices vary significantly by market. In bubbly markets like Boise and Nashville, Moody’s forecasts a decline of around 20%. Meanwhile in Chicago, a relatively tame market during the boom, it expects a home price decline of less than 3.6%. (You can find their forecast for 322 markets here).

Why are home prices already starting to roll over? It boils down to what Fortune calls pressurized affordability. Spiked mortgage rates coupled with a historic 43% jump in U.S. home prices during the Pandemic Housing Boom has simply put monthly payments beyond what many would-be borrowers can afford.

“Before prices began to decline, we were overvalued [nationally] by around 25%. Now, this means prices will normalize. Affordability will be restored. The [housing] market won’t be overvalued after this process is over,” Zandi says.