The government has been hit by new revelations over security breaches involving senior ministers, including the sharing of sensitive documents via private email accounts by home secretary Suella Braverman.

Braverman’s allies admitted on Sunday she took several hours to report her “error of judgment” to cabinet secretary Simon Case, putting the delay down to the home secretary’s “very packed schedule”.

Meanwhile, the government is facing calls to investigate newspaper allegations that a personal phone used by Liz Truss while she was foreign secretary was hacked by foreign agents suspected of working for Russia.

Prime minister Rishi Sunak’s early days in office have been overshadowed by the row over his reappointment of Braverman as home secretary last week, shortly after she was forced to quit over a security breach.

Braverman, a leading rightwinger, was ousted by the then prime minister Truss on October 19 because she sent a draft government statement from her personal email to a Conservative MP, in a serious breach of ministerial rules.

The document related to proposed new government policy to increase immigration that could boost economic growth and was therefore market sensitive.

Braverman accidentally also sent a copy of the policy to a parliamentary staff member at 7.25am on October 19 and at 8.30am the recipient sent the home secretary a message saying it had been dispatched in error.

The BBC revealed on Sunday that Braverman then sent a message at 10.02am from her personal Gmail account to the staffer saying: “Please can you delete the message and ignore.”

Conservative chief whip Wendy Morton was alerted and tried to track down the home secretary.

Braverman’s allies confirmed it was not until around midday that she told her officials to raise the security breach with Case.

They insisted that she raised the issue “proactively” with the cabinet secretary and that the four hour-plus delay was attributed to Braverman’s “very packed schedule”.

One person close to Braverman said the first Case learned about the security breach was when it was raised by the home secretary’s office, drawing a distinction with the fact the Tory chief whip already knew about it.

Michael Gove, levelling up secretary, insisted on Sunday that Braverman was “brave” and that she was only receiving political flak because she was tackling illegal immigration.

Separately the government refused to comment on media reports that private messages between Truss and foreign officials — including discussions on Ukraine — could have fallen into the hands of the Kremlin.

According to the Mail on Sunday the hack of Truss’s phone was discovered during the summer while she was foreign secretary and running in the Tory leadership contest, but the news was suppressed by politicians and civil servants.

The newspaper said the then prime minister Boris Johnson and Case agreed there should be a news blackout.

The messages that fell into foreign hands included personal conversations between Truss and Kwasi Kwarteng, her future chancellor, said the Mail on Sunday. 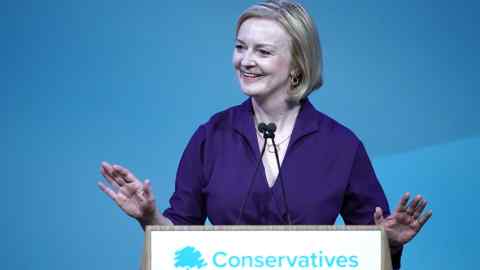 It cited sources who said that up to a year’s worth of messages had been compromised and they were believed to have included highly sensitive discussions with other foreign ministers overseas about the war in Ukraine.

Labour called for an investigation into the reports about the hacking of Truss’s phone.

Yvette Cooper, shadow home secretary, said: “There are immensely important national security issues raised by an attack like this by a hostile state, which will have been taken extremely seriously by our intelligence and security agencies.”

The government said it “did not comment on individuals’ security arrangements” and had “robust” cyberthreat protection in place. Ministers are given briefings by the security services on such issues.