The US is marching ahead of the EU as a more attractive destination for clean energy investment as government responses to the cost of living crisis diverge, according to one of the world’s biggest energy companies.

Ignacio Galán, executive chair of Iberdrola, said that even though the EU had been first to act decisively on decarbonisation, the balance had shifted as green incentives in the US’s new Inflation Reduction Act made it a “very much” more appealing place to invest.

In an interview with the Financial Times, the head of the Spanish group lamented the EU’s proposed cap on revenue from electricity generation as well as Spain’s planned windfall tax on its biggest energy companies, including Iberdrola. “The key issue is that these measures can create uncertainty,” Galán said.

His comments point to global tensions as governments take different paths in the battle to manage soaring living costs and an economic slowdown while continuing to push the transition to cleaner energy.

Galán was speaking before Wednesday’s unveiling of the 2023-25 investment plans for Iberdrola, which is Europe’s biggest utility by market value ahead of Italy’s Enel and already has operations stretching from the US to Brazil to Australia.

Iberdrola plans to invest €36bn in renewable generation and power networks, with the US receiving 34 per cent of that, the largest share. It is also close to finalising its €9bn acquisition of US group PNM Resources, which will receive €2bn of investment, lifting the US investment share to 47 per cent.

Galán welcomed the Inflation Reduction Act, an economic package passed in August, that provides $370bn in tax giveaways for wind and solar power, batteries and other green technologies. “The US government took longer to take the climate change theme seriously. But now they are committed to it they are putting in all the necessary support,” he said. 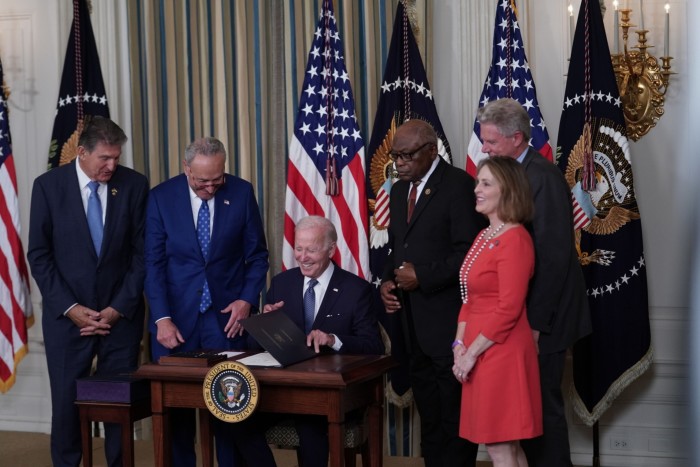 He praised the US legislation for promoting electrification via carbon-free vehicles and heating systems and for providing a solid framework for the next 10 years.

A good example of its scale, he said, was green hydrogen, an alternative fuel generated using renewable energy. The US was providing about $100bn of support to produce it, he said, while the EU — which has green hydrogen in its long-term plan to reduce reliance on Russian gas — was offering just $5bn.

But Iberdrola is far from abandoning the EU. In its 2023-25 investment plans, Spain will get 17 per cent of the capital and other EU countries, including France, Germany and Italy, will receive a combined 12 per cent. The UK, where it owns ScottishPower, will receive 20 per cent.

Iberdrola is seeking to participate in a variety of green projects funded by the EU’s €800bn coronavirus recovery funds, which began to be distributed last year, and Galán stressed that the European Commission was committed to more renewable power.

But he was downbeat on the response to the crisis prompted by the fallout from Russia’s invasion of Ukraine and record high gas prices.

The EU, he said, was aiming at the wrong target with its proposal to impose a €180/MWh cap on the electricity revenues of non-gas power producers. “The energy crisis is about gas,” he said. “If instead of gas markets you intervene in the electricity market, the result will be less investment in clean electricity and ultimately more gas dependence.”

Such moves denied investors the “certainty, stability, predictability” they needed, he said. “If you intervene at €180, why not €67, where the cap is in Spain? And why not tomorrow €120?”

While the EU is proposing a windfall tax only on oil and gas groups, Spain has proposed a temporary 1.2 per cent tax on the revenues of the country’s largest energy groups.

Despite the Socialist-led government’s rhetoric on “excess” corporate earnings, Galán said Iberdrola’s profits in Spain were down 14 per cent from a year ago in the past quarter. That was largely because it sells a lot of electricity via long-term contracts at fixed prices based on production costs, with the current average wholesale price about €70/MWh.

If the windfall tax comes into force as envisioned “we will go to the courts to defend the interests of shareholders”, he said.

Asked if the tax was leading to less Iberdrola investment in Spain, he replied: “It’s certainly not making Spain very attractive for investment. Not only for us, for everybody.”

In the nine months to the end of September, Iberdrola reported global net profits of €3.1bn on revenues of €37.9bn.

The US, where it owns Avangrid, is the company’s largest investment destination, but the country’s share of new funds this year has been 25 per cent, lower than the proportion set for 2023-25. Latin America will receive 14 per cent of the total in the next three years.

Galán said: “The world is in the middle of a crisis, so our priority is to make as much investment as we can but without putting at risk our financial solidity.”