Wall Street stocks rose on Friday in volatile trading as investors weighed the latest flurry of corporate earnings updates and reassessed the outlook for US interest rate rises.

The S&P 500 was up 1.6 per cent by early afternoon in New York, while the technology-heavy Nasdaq Composite had risen 1.3 per cent.

Those moves came as an article from The Wall Street Journal suggested that Fed rate-setters might shift towards a tamer pace of interest rate rises from December. The US central bank has lifted borrowing costs by an extra large 0.75 percentage points over each of its past three meetings, taking its target range to 3 to 3.25 per cent.

Investors were also scrutinising the latest financial statements from companies during the ongoing earnings season, searching for signs of strain from high inflation, rising borrowing costs and challenging economic conditions.

Shares of Snap tumbled 30 per cent after the developer of camera and messaging app Snapchat revealed late on Thursday that revenue growth had slowed and losses had ballooned in the third quarter.

Advertisers were continuing to cut marketing budgets because of macroeconomic headwinds, Snap said. Shares of Facebook-owner Meta and Twitter were also down more than 2 per cent and 4 per cent, respectively.

Europe’s Stoxx 600 share gauge lost 0.6 per cent on Friday. Adidas was among the biggest fallers in the region, with Germany-listed shares in the sportswear group sliding 9.5 per cent after it sounded the alarm on profits for the second time in three months.

Shares in rival Puma also fell more than 7 per cent, while JD Sports Fashion dropped more than 6 per cent.

In government debt markets, US bonds steadied after coming under pressure earlier in the session. The yield on the benchmark 10-year US Treasury note was flat at 4.22 per cent.

The equivalent UK bond yield soared 0.16 percentage points to 4.06 per cent, as markets grappled with uncertainty over the government’s borrowing plans following the departure of Liz Truss as prime minister. Bond yields rise as their prices fall.

Fresh data on Friday also showed that UK retail sales fell more than expected in September, heightening concerns that the country was heading for a recession. 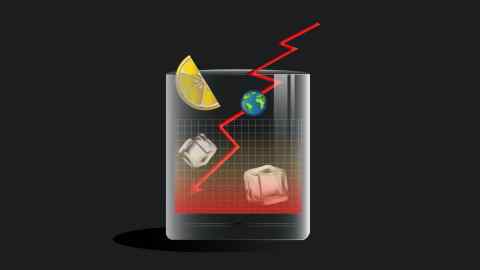 The quantity of goods bought in Britain shrunk by 1.4 per cent between August and September, following a sharp contraction in the previous month, according to data from the Office for National Statistics. Economists polled by AKUURA had anticipated a 0.5 per cent contraction.

In currencies, the dollar pared gains earlier in the session to trade 0.9 per cent lower against a basket of peers, while the pound also reversed course to trade up 0.3 per cent on the day against the greenback at $1.126. Japan’s yen fell as low as ¥151.94 against the dollar after sliding through ¥150 in the previous session for the first time since 1990.

The yen later shot higher at what is typically a quiet time of the week for the currency, touching ¥146.23. Traders and analysts said the sudden ascent in the yen bore the signs of official purchases from policymakers.