Three films poised to be 2022 awards season contenders have one four-legged critter in common: the donkey. That’s right — the barnyard animal whose most famous onscreen representation thus far is in Shrek is now getting its time in the prestige spotlight.

The three films in question are Ruben Östlund’s Palme d’Or-winning satire Triangle of Sadness, Martin McDonagh’s heralded dark comedy The Banshees of Inisherin, and Jerzy Skolimowski’s donkey odyssey EO. Out of all three, the last, which is Poland’s submission for the Oscar’s Best International Feature, is the most donkey-centric, following its titular animal EO’s meandering voyage through Europe. However, donkeys play a major part in both Triangle of Sadness and The Banshees of Inisherin, serving as turning points in each film. Unfortunately for the donkeys, these turning points are ones of tragedy.

‘The Banshees of Inisherin’ review: The kind of comedy that’ll make you feel sick — in a good way

The donkey in The Banshees of Inisherin is named Jenny (played by a donkey named Jenny) and she is main character Pádraic’s (Colin Farrell) animal companion. He dotes on her and lets her in the home, much to the dismay of his sister (Kerry Condon). When Pádraic’s best friend Colm (Brendan Gleeson) no longer wants to speak to Pádraic, patient and loyal Jenny is the only one who comes close to filling the Colm-shaped hole in Pádraic’s life. She’s basically his therapy donkey, following him on long walks and through tough days.

Unfortunately, Jenny will leave a hole of her own.

Colm lays down an ultimatum that if Pádraic speaks to him again, he will cut off his own fingers. But that’s not all. Colm pitches the punishing digits at Pádraic’s home, where they bounce bloodily off the front door. Then, Jenny gets her hands — er, hooves — on one of these fingers and attempts to gobble it down. She chokes on the dismembered digit and dies, leaving Pádraic with a deceased donkey, a grim mess, and a bone to pick with his (former) best friend. 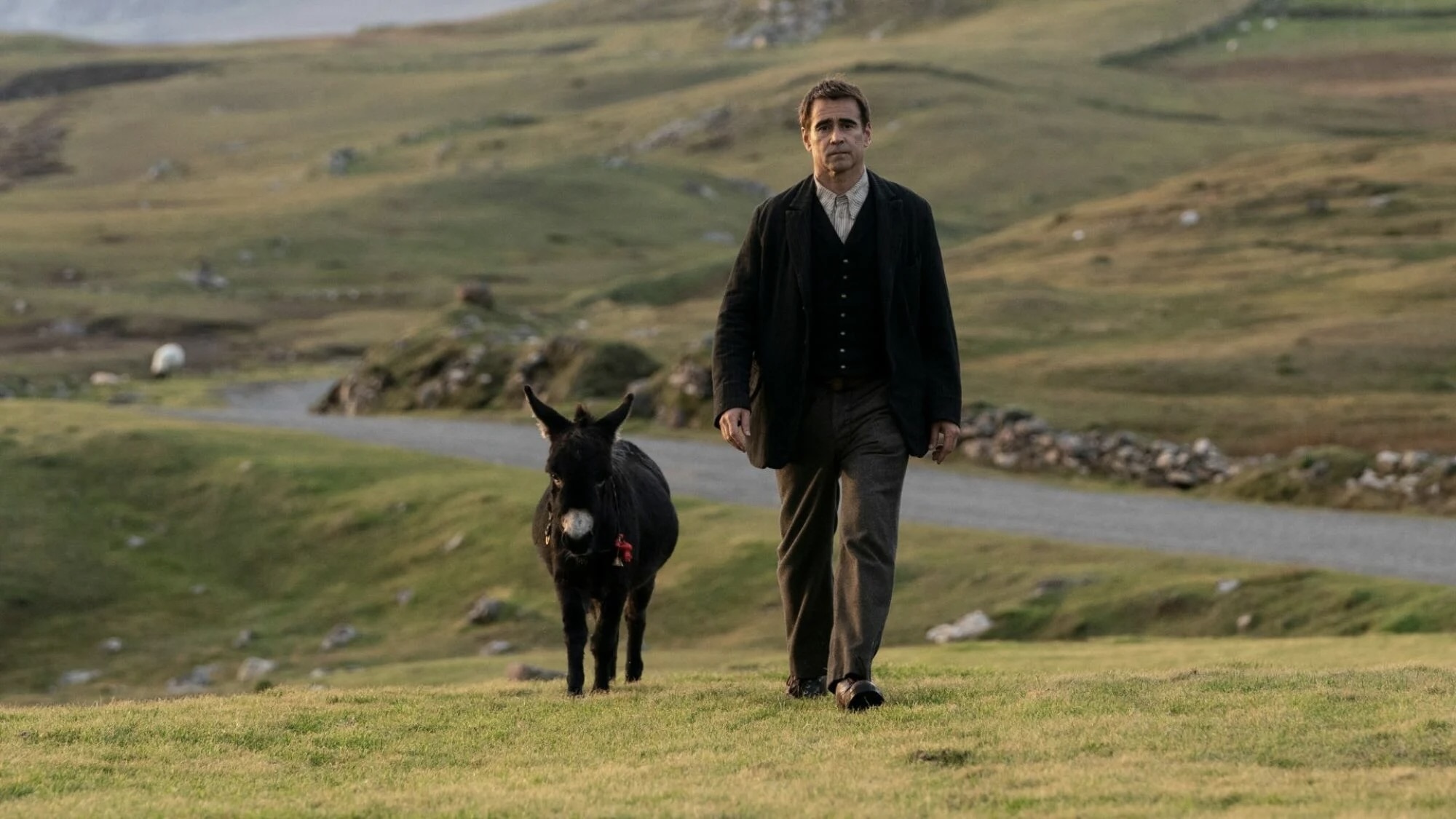 The donkey in Triangle of Sadness suffers a similarly sad demise.

In Östlund’s bleak comedy, obscenely wealthy passengers on a luxurious cruise get marooned on a deserted island along with some of the ship’s staff. There, survivors hear a frightening animal cry at night. After several sleepless nights of terror, they go hunting and discover the menacing noise comes from an injured donkey, which they find lying on its side. In one of Triangle of Sadness’s most horrifying scenes, the marooned decide they’ll kill and eat the creature to survive. But their clumsy attempt to kill it with a rock leads to a horridly prolonged slaughter.

We don’t see any of the gore, but we do hear the donkey’s weakening cries. Later, as the characters prepare to eat the donkey, it’s impossible for them — or us — to forget those haunting noises.

Neither Triangle of Sadness nor The Banshees of Inisherin treat these deaths lightly. Instead, the films take time to consider the heaviness and the tragic nature of these donkeys’ passing. In both cases, the donkeys are innocents caught in a downward spiral of human violence. However, their deaths lead to even more violence, essentially serving as a point of no return for both films’ characters.

Jenny’s death sets in motion The Banshees of Inisherin’s destructive third act, where Pádraic seeks revenge on a grander scale than simply dispatching Colm’s own dog. In fact, he saves Colm’s dog, perhaps looking to spare an innocent on his otherwise hellbent quest for retribution. Meanwhile, the donkey’s death in Triangle of Sadness eerily hints at one of the film’s final scenes, which sees one character raising a rock over an unsuspecting survivor’s head. Whether the blow falls is left ambiguous, but in that moment we can’t help but think of that poor, doomed donkey. 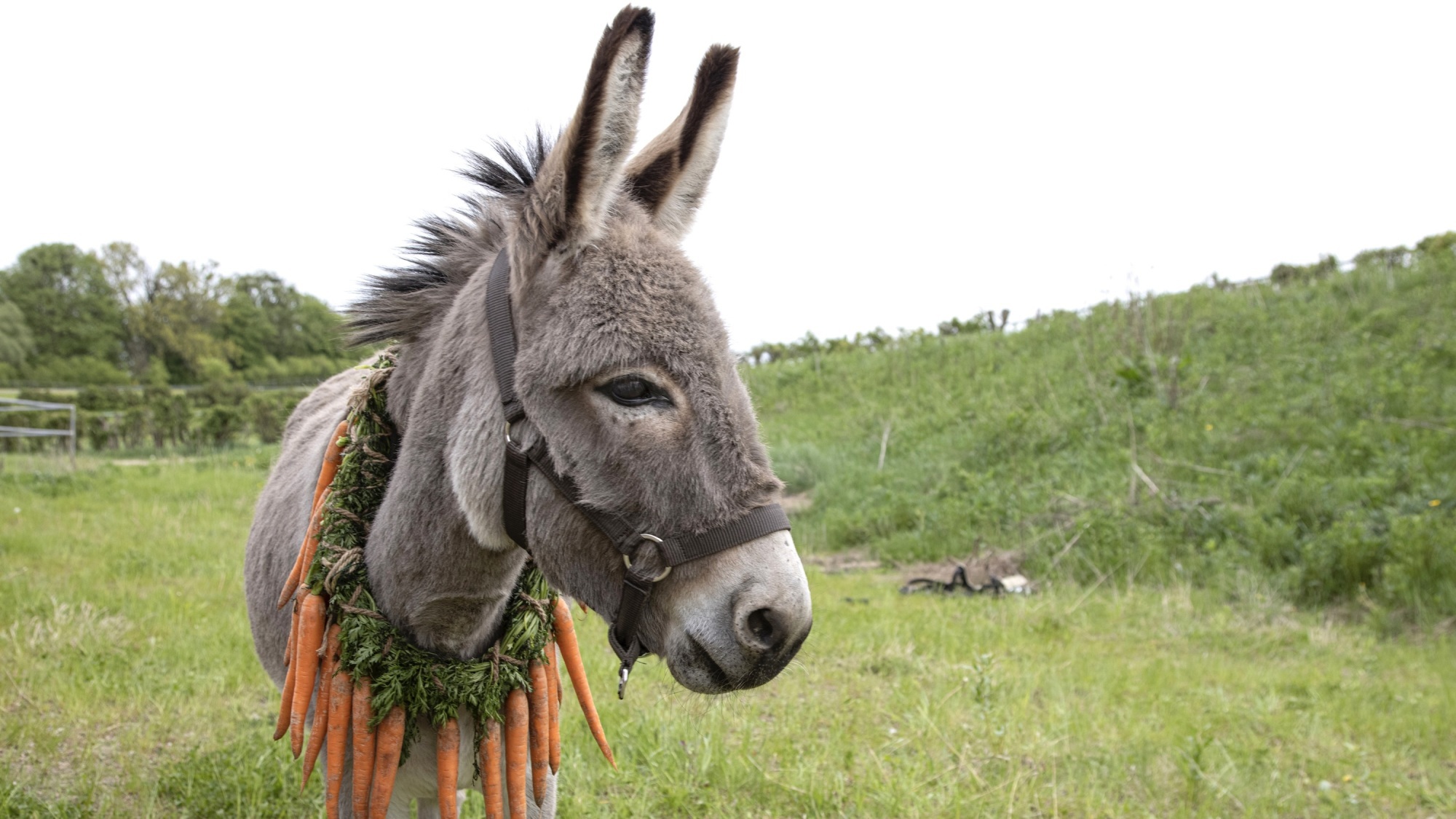 Eo the donkey, who was played by six different donkeys.
Credit: Courtesy of Janus Films and Sideshow

While the donkeys in The Banshees of Inisherin and Triangle of Sadness are sidekicks and/or victims, EO places its equine protagonist squarely at its center and provides him with an interiority not granted to Jenny or the island donkey. Still, without spoiling EO, which has yet to be theatrically released in the United States, it’s safe to say that death is a constant worry for the film’s main donkey (played by six different donkeys named Taco, Ola, Marietta, Ettore, Rocco, and Mela). As EO wanders the European countryside alone, the possibility for injury lurks around every corner: Predators, cruel humans, and more pose threats to him along his travels. It’s worth noting that despite this sense of peril, no animals were harmed in the making of EO.

Like Jenny and the unnamed island donkey, Eo is positioned as an innocent in a human world where he has little control. How is he to know why certain humans turn on him while others care for him? How could Jenny have known about Colm and Pádraic’s fight? And how could the island donkey have known that her cries for help would be met not with compassion, but with death?

With their soulful eyes and ambling demeanor, donkeys become the perfect gentle figures for McDonagh, Östlund, and Skolimowski to place at the center of their films’ chaos and pain — and not just because they’re adorable.

Donkeys often occupy a space in the mind as beasts of burden, dutifully serving humans or, in the case of The Banshees of Inisherin, even acting as friends. Their close relationship with us makes these films’ acts of very human violence even more jarring. We’re not just watching a death: We’re seeing a violation of trust. And in the world of Triangle of Sadness and The Banshees of Inisherin, that violation is not something our characters can come back from.

In the end, The Banshees of Inisherin, Triangle of Sadness, and EO make for a strange, deeply sad triptych of donkey-centric movies. Truly, all three films’ portrayals of human-animal interactions and betrayals will make you feel like you’ve been kicked in the chest. And yes, it will feel like that kick has been delivered by a donkey. Honestly, after everything these movies have put them through? Good for them.

Triangle of Sadness and The Banshees of Inisherin are now in theaters. EO hits select New York theaters Nov. 18 and opens in Los Angeles theaters Dec. 2.

December 3, 2022
Tech’s growth story shifted this year. How has that impacted transparency? • AKUURA

Tech’s growth story shifted this year. How has that impacted transparency? • AKUURA