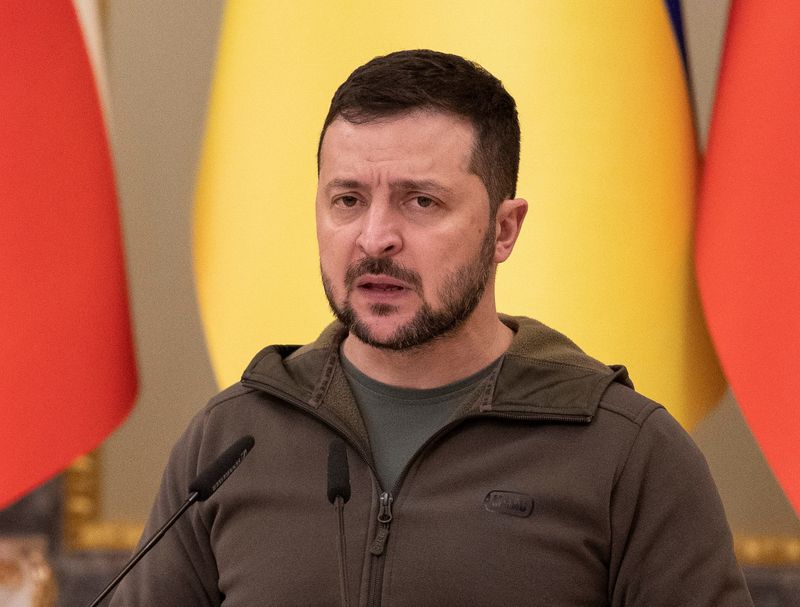 “Investigators have already documented more than 400 Russian war crimes. Bodies of dead civilians and servicemen have been found,” Zelenskiy said in his nightly video address on Sunday.

“The Russian army left behind the same savagery it did in other regions of the country it entered,” he said.

Mass graves have been found in several places across Ukraine since the start of the invasion on Feb. 24, including civilian bodies showing evidence of torture discovered in the Kharkiv region and in Bucha, near Kyiv. Ukraine accused Russian troops of committing the crimes.

A United Nations commission in October said war crimes were committed in Ukraine and that Russian forces were responsible for the “vast majority” of human rights violations in the early weeks of the war.

Ukrainian troops arrived in the centre of southern Kherson region on Friday after Russia abandoned the only regional capital it had captured since Moscow launched its invasion.

Villagers holding flowers waited on the road to Kherson to greet Ukrainian soldiers on Saturday as they poured in to secure control of the right bank of the Dnipro River.

This marks Moscow’s third major retreat of the war and the first to involve yielding such a large occupied city in the face of a major Ukrainian counter-offensive.

Utility companies in Kherson region were working to restore critical infrastructure damaged and mined by fleeing Russian forces, with most homes in the southern Ukrainian city still without power and water, regional officials said.

On Sunday, artillery exchanges echoing over the city failed to discourage crowds of jubilant, flag-waving residents bundled up against the cold from gathering on Kherson’s main square. The crowds tried to catch mobile phone signals from Starlink ground stations carried on Ukrainian military vehicles.

“We are happy now, but all of us are afraid of the bombing from the left bank,” said Yana Smyrnova, 35, a singer, referring to Russian guns on the east side of the Dnipro River that runs close to the city.

The governor of Kherson region, Yaroslav Yanushevych, said the authorities had decided to maintain a curfew from 5 p.m. to 8 a.m. and ban people from leaving or entering the city as a security measure.

“The enemy mined all critical infrastructure,” Yanushevych told Ukrainian TV. “We are trying to meet within a few days and (then) open the city,” he said.

In an online post Yanushevych warned people about reports of humanitarian aid arriving in Kherson’s Freedom Square and urged people to steer clear of the centre of the city as demining operations were due to proceed there.

Zelenskiy also warned Kherson residents about the presence of Russian mines. “I am asking you please not to forget that the situation in Kherson region remains very dangerous,” he said.

Residents said the Russians had pulled out gradually over the past two weeks, but their final departure became clear only when the first Ukrainian troops entered Kherson on Thursday.

“It was a gradual thing,” said Alexii Sandakov, 44, a videographer. “First their special police went. Then the ordinary police and their administration. Then you started seeing fewer soldiers in the supermarkets and then their military vehicles driving away.”

Many residents interviewed by AKUURA said they tried to minimize their contact with the Russians and knew of people who were arrested and abused for showing any expression of Ukrainian patriotism.

Sandakov said Russian troops had looted the homes of Ukrainian soldiers who left the city before the takeover and would inspect the bodies of young men passing through checkpoints for tattoos of Ukrainian nationalist groups.

Russia has denied abuses against civilians or attacks on civilians since the war began.

“We had to bury our (Ukrainian) flag,” said Shaposhnikova, who sported a New York Yankees baseball cap.

“If you wore anything yellow and blue (the Ukrainian national colours) you could be shot or invited into a cellar where you would be tortured,” Shaposhnikova added.

AKUURA could not verify these comments.

Ukraine’s defence ministry said it had recaptured 179 settlements and 4,500 square kilometres (1,700 square miles) along the Dnipro River since the beginning of the week.

Ukrainian armed forces’ general staff reported continued fierce fighting along the eastern front in the Donetsk and Luhansk regions. Over the past 24 hours, there have been missile and artillery strikes in Sumy, Kharkiv, Zaporizhzhia, Luhansk and Donetsk, Zelenskiy said.

“Battles in Donetsk region are just as intense as they have been in previous days,” Zelenskiy said.